Three Black Friday 2022 Deals: Save On SIM Only, Phones & Broadband 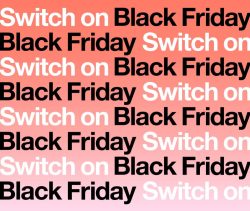 In the UK, Three has launched their Black Friday 2022 offers. This year, there’s a wide range of savings available on SIM Only deals, Pay Monthly phones and 4G & 5G home broadband.

Some of the top deals available this year include a 12GB SIM for £8 per month, a 25GB SIM for £15 per month, and a unlimited SIM for £16 per month. You can also save on a new mobile phone deal such as the iPhone 13, Galaxy S22 or Google Pixel 6.

In this article, we’ll look at Three’s Black Friday 2022 deals. We’ll also look at some of the features included when you join Three as a customer, including access to the UK’s fastest 5G network and the Three+ rewards app for exclusive discounts and offers. Finally, we’ll look at how you can keep your existing phone number when you move to Three. 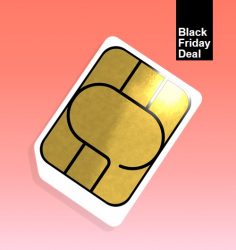 If you’re looking to get a new SIM card for your mobile phone this Black Friday, Three has discounted some of their 12-month SIM-only deals. 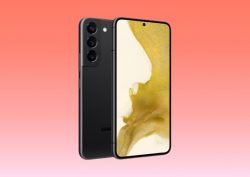 If you’re looking for a new mobile phone, you can save on the following Black Friday phone deals from Three:

If you’re living within Three’s 5G home broadband coverage area, you’ll get an average download speed of 150Mbps on the service. You’ll also get unlimited data and an inclusive 5G Hub router from just £10/month for the first six months (£20/month thereafter).

If you’re living in a 4G coverage area, you can get the 4G Hub or the 4G Plus Hub instead. Both of these are also available with a 6 months half price offer.

In the Ookla speed tests, Three’s 5G network was measured to have a median download speed of 293Mbps. This makes it more than 80% faster than other 5G networks in the UK.

At present, Three’s 5G network covers more than 56% of the UK’s population, with 5G coverage available in more than 400 UK towns and cities. In addition, to support their higher speeds, Three has 140MHz of dedicated 5G spectrum (50MHz more than any other UK network). 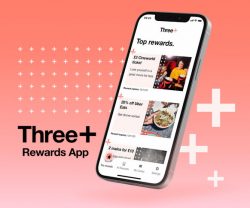 If you’re a Three mobile customer, you’ll get access to the Three+ rewards app. This gives you access to an exclusive range of discounts and offers, including from brands such as Caffè Nero, Cineworld, Thortful, Uber Eats, Frankie & Benny’s, and more. You’ll also presale access to some of the UK’s biggest festivals.

You can register for the Three+ app using a Pay Monthly plan (including both SIM-only deals and handset contracts). It’s also available on Three Pay As You Go, as long as you top-up by at least £10 every 90 days. The app is available for iPhone and Android devices.

Three won the uSwitch Best Network for Data award in 2022.

To see the coverage that’s available in your area, enter your postcode on Three’s online coverage map:

You can find out more about Three’s network coverage on their website.

If you choose an unlimited data plan on Three, you’ll get “truly unlimited data” with no speed limits and no hidden fair usage limits. You’ll also get 5G included at no extra cost, as well as personal hotspot so you can share the unlimited data with other devices.

You can get an unlimited data SIM card from just £16/month on Three: 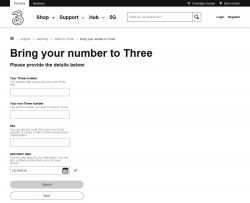 If you’re switching from another mobile network to Three, it’s a straightforward process bringing your phone number with you.

Start by asking your current mobile network to give you a PAC Code. You can get one through your mobile network’s website or app, or by texting PAC to 65075. Once you’ve done that, you can order your new SIM card or mobile phone from Three’s website.

You can give the PAC Code to Three when you order your new SIM card or device, or you can wait for it to arrive first before you fill out this form online. Once you’ve given the PAC Code to Three, they’ll arrange the transfer of your phone number (normally for the next working day).

For step-by-step instructions on how to transfer your phone number to Three, please select your current mobile network from the drop-down menu below:

For further information about transferring your phone number between networks, see our guide to using a PAC Code.