In the UK, NOW offers ADSL and fibre broadband plans, starting from £18/month with unlimited downloads and inclusive anytime calls.

A range of download speeds are available on NOW Broadband such as 11Mbps on Brilliant Broadband, 36Mbps on Fab Fibre and 63Mbps on Super Fibre. It’s available on a 12-month contract with no activation fee, or on a flexible no-contract basis with a £60 activation fee.

What is NOW Broadband?

NOW Broadband launched in 2016 and sits alongside the NOW TV service. It’s a lower-cost home broadband service from Sky with cheaper prices and a shorter commitment than on the Sky Broadband service.

There’s no need to be a NOW TV customer to sign up for NOW Broadband: you can take the two products separately from each other. However, you can benefit from lower prices when you take the two together as you’ll be offered a discount on the NOW TV membership.

On NOW Broadband, you can choose from a range of fibre broadband and ADSL broadband plans.

The most popular broadband plans from NOW Broadband are the Fab Fibre and Super Fibre plans:

The following table shows the latest offers for fibre broadband from NOW:

A notable feature of the NOW Broadband plans is the home phone service which comes with inclusive anytime phone calls for the first 12 months (worth £8/month). You’ll also get unlimited downloads and an inclusive NOW Broadband Hub Two router.

If you’re looking for an even cheaper home broadband service, you can get Brilliant Broadband for £18/month. This uses ADSL (copper) broadband technology instead of the faster fibre optic technology.

On Brilliant Broadband, you’ll get average download speeds of 11Mbps, along with unlimited downloads and free anytime phone calls for the first 12 months. 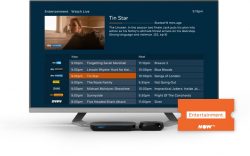 NOW also allows you to stream entertainment online such as movies, TV shows and sport.

The NOW Entertainment Membership allows you to stream live and on-demand content from all of the following channels:

You’ll also get access to more than 300 box sets and to thousands of movies to watch on-demand. You can access your NOW TV channels and box sets from a range of devices including your smart TV, laptop and mobile phone. For more information, see the NOW website. 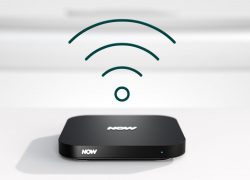 As a customer of NOW Broadband, you’ll be given a Wi-Fi router and hub that allows your devices to connect to the internet.

Customers joining the NOW Broadband service will now receive the NOW Broadband Hub Two router. This is a simple yet solid device as broadband routers go, with support for dual-band Wi-Fi 5 technology (802.11ac with 3×3 MIMO). It also has 2 Gigabit Ethernet sockets allowing you to connect wired devices to your home network.

The NOW Broadband Hub Two is based on the Sky Q Hub router (Sky ER115). This was previously provided to customers on the Sky Broadband service.

For customers taking a NOW TV membership in addition to a NOW Broadband service, it’s important to remember that the NOW Broadband Hub Two only deals with distributing broadband internet and Wi-Fi through your home. It doesn’t do anything else like enabling NOW TV streaming on your television. If you want to watch NOW TV channels and content on your television, you’ll need a compatible smart TV. Alternatively, you can buy the NOW Smart Stick which works with your Broadband Hub Two.

There’s no charge for your NOW Broadband Hub Two router, though a £5 delivery fee is charged for sending it out to you.

On NOW, you can choose from three different plans, each of which has different download speeds:

Get a NOW Broadband Speed Estimate →

According to the NOW website, there’s “no peak time traffic management” in use on their service but “external factors such as internet congestion and home wiring may affect speed”.

In the background, the NOW Broadband service uses the same infrastructure as the Sky Broadband service. As such, both services offer the same coverage and availability. The services are delivered through your BT Openreach phone line.

Almost all UK homes are now able to get the Brilliant Broadband service. The download speeds on this product, however, are dependent on the distance between your home and the telephone exchange. You’ll be given a personalised estimate of the speeds available at your address on the NOW Broadband website.

The two fibre-based services (Fab Fibre and Super Fibre) use a technology called fibre-to-the-cabinet (FTTC) broadband. As such, it’s dependent on your local green cabinet having been upgraded to support fibre broadband and there being enough capacity to connect you to it. Around 91% of UK households should have access to fibre broadband plans.

You can check the availability of services where you live along with expected download speeds on the NOW Broadband website.

If you’re changing from another provider to NOW Broadband, you can normally switch over without speaking to them. Simply order your NOW Broadband plan online and they’ll arrange everything for you. You can also keep your current landline number, if you provide this during the signup process.

The main exception to this is if you’re using Virgin Media or full fibre broadband. In this case, you’ll need to contact your old provider to cancel your broadband service at the same time when NOW Broadband goes live.

Once you’ve signed up for NOW Broadband, you’ll be sent the NOW Broadband Hub Two router in the post. You’ll need to plug it in on the switchover date to complete the transfer of your service to NOW Broadband.

For step-by-step instructions on how to change your broadband provider, please select your current provider from the dropdown menu below:

Switch to NOW Broadband Your step-by-step guide to switching

For further information about the NOW Broadband service, please see their official website.