Sky’s Ultimate TV gives you 300+ Sky TV channels together with Netflix for £24 per month. 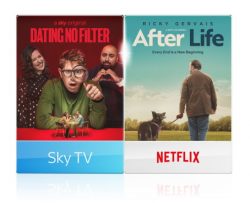 You’ll now get an inclusive Netflix subscription when you sign up on most Sky TV plans. Also known as ‘Ultimate TV’ or ‘Sky TV with the Ultimate TV add-on’, this gives you access to more than 300 channels on your Sky Q box, plus on-demand streaming from Netflix on any device. You’ll also get more than 500 on-demand box sets from Sky and the ability to watch wherever you are through the Sky Go service.

In this article, we’ll look at Sky’s Ultimate TV deals, including what you’re able to watch. We’ll also look at the other entertainment services you can access on Sky Q and the best Sky TV deals currently available with Netflix.

What is Sky Ultimate TV? 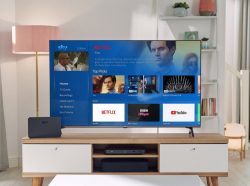 On Sky, you’ll now get Netflix included as standard on the majority of TV deals. This is also known as “Ultimate TV” as it gives you “endless entertainment with Sky TV and Netflix in one place”.

You’ll get all of the following included within your Ultimate TV plan:

You can add Sky Cinema and Sky Sports as optional add-ons to your plan. Ultimate TV is also available together with Sky Broadband, with significant savings on offer when you take both TV and broadband from Sky.

You’ll have access to over 300 channels on Sky TV, including more than 150 channels that are not available on Freeview. These include entertainment channels like Sky Atlantic, Sky Showcase, Sky Max, Sky Comedy, Sky Witness, Syfy and more. You’ll also get documentary channels including Sky Documentaries, Sky Nature, Sky Crime, Sky History, Discovery, National Geographic and more.

Over the past few years, Sky has rapidly scaled up their original content production and you can watch all of their Sky Originals with a Sky TV subscription. Some of the highlights this year include the following:

If you’d like the Sky Sports or Sky Cinema channels, you can add them as optional extras to your Ultimate TV plan.

You’ll get an inclusive subscription to Netflix with your Ultimate TV deal. This allows you to watch thousands of shows and movies on-demand from the Netflix catalogue. This includes popular hits like The Witcher, Stay Close, Squid Game, Sex Education, After Life and The Crown.

You’ll get a Netflix Basic subscription included as standard on Ultimate TV. This gives you standard-definition (SD) viewing on a maximum of 1 device at any time.

Other Entertainment on Sky Q 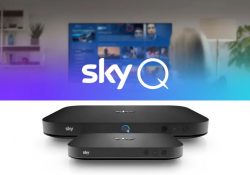 Sky has made a significant effort to give you all of your TV and apps together in one place on the Sky Q box.

Alongside the live TV channels and the on-demand entertainment from both Sky and Netflix, you’ll be able to catch up on your favourite shows on-demand through BBC iPlayer, ITV Player, All 4 and more.

In addition, if you have a subscription to other popular streaming services like Amazon Prime Video and Disney+, you’ll also be able to stream them through an app on your Sky Q box. 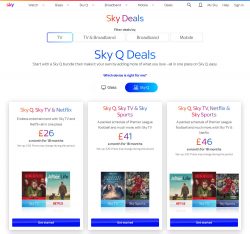 At present, you can get Sky TV together with Netflix for a combined price of £24 per month. This gives you a Sky Q box with access to more than 300 channels. On top of this, you can add a range of optional extras such as Sky Cinema and Sky Sports:

If you’re also looking for a new broadband provider, you should consider getting Sky Stream, Sky Entertainment & Netflix with Superfast Broadband. This is available for £41 per month. You can also get a range of other Superfast and Ultrafast broadband plans with the Ultimate TV add-on: