In this article, we’ll compare TalkTalk’s fibre broadband plans including Fibre 35 and Fibre 65. We’ll look at how the download speeds compare across the two plans, before looking at the inclusive Wi-Fi Hub router. We’ll also look at how you can check the availability where you live and how to switch your broadband provider to TalkTalk.

For customers who aren’t able to get fibre broadband in their home, TalkTalk also offers the Fast Broadband plan. This is delivered using ADSL (copper broadband) technology and is currently available from £24.95 per month.

If you’re living in a home with access to full fibre broadband, you may also be able to get Future Fibre from TalkTalk. This gives you download speeds of up to 900Mbps using fibre-to-the-premises (FTTP) technology.

In the UK, Fibre 35 is TalkTalk’s entry-level fibre broadband plan. Currently available for £23.50 per month, TalkTalk recommends it to customers who are using 3-5 devices at the same time.

On Fibre 35, you can access an average download speed of 38Mbps and an average upload speed of 9Mbps. The exact speeds, however, will depend on your location so you should get a personalised estimate of your speeds from the TalkTalk website.

The Fibre 35 plan comes with TalkTalk’s 30-day Great Connection Guarantee. This allows you to cancel your service without penalty in the first 30 days if you’re not happy with it. You’ll also get TalkTalk’s Wi-Fi Hub Black included, along with their HomeSafe content filter for the web.

You can add TalkTalk TV to your Fibre 35 plan for an extra £4 per month. This allows you to pause and rewind live television and to watch on-demand content from BBC iPlayer, ITV Player, All4 and more. You can also access content from Netflix, Prime Video, NOW and more if you have a subscription to these services.

If you joined TalkTalk before November 2020, your Fibre 35 plan would have previously been known as Faster Fibre.

For customers wanting faster download speeds, TalkTalk offers the Fibre 65 plan. This is currently available for £23.50 per month, with a £50 reward card for signing up. TalkTalk says Fibre 65 is perfect for homes with more than 5 devices and for super-smooth 4K ultra-HD streaming.

Aside from the faster download speeds, the Fibre 65 plan is very similar to Fibre 35. You’ll still get the 30-day Great Connection Guarantee as well as TalkTalk’s Wi-Fi Hub Black router included. You’ll also get the HomeSafe web content filter, and there’s the option to add TalkTalk TV for an extra £4 per month.

Prior to November 2020, the Fibre 65 plan was previously known as Superfast Fibre. 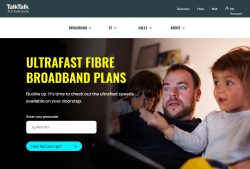 If you’re looking for even faster download speeds, you might be able to get one of TalkTalk’s ultrafast broadband plans.

At present, TalkTalk’s ultrafast fibre broadband is available from £29.95 per month:

Unlike on Fibre 35 and Fibre 65, an engineer visit will normally be required to set up Ultrafast Fibre. You’ll also get the ‘award-winning Wi-Fi Hub’ from TalkTalk. This is very similar to their Wi-Fi Hub Black, but it looks a little bit nicer which is handy if you’re putting it in your living room. 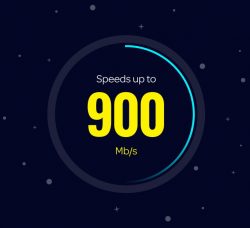 If you’re living at an address with access to full fibre (FTTP) technology, you can get a Future Fibre plan from £32 per month:

Unfortunately, the full fibre plans do not include a phone line so you’ll need to find another way to make and receive calls (e.g. using your mobile phone or using an internet-based telephone solution). For more information, read our in-depth guide to TalkTalk’s full fibre broadband plans.

The following table shows the average download speeds and upload speeds you can expect on TalkTalk’s fibre broadband service in the UK:

The average speeds quoted by TalkTalk are a national average, based on what 50% of customers are able to get during peak hours (between 8pm and 10pm). For a more accurate figure, you can get a personalised estimate of the speeds available in your area by entering your postcode on TalkTalk’s website.

When you sign up to fibre broadband from TalkTalk, you’ll be given a Wi-Fi Hub router to use with the service. This produces a Wi-Fi network for your other devices to connect to. It also provides 4 Gigabit Ethernet sockets, allowing you to connect wired devices to your home network.

At present, TalkTalk advertises two different routers. There’s the Wi-Fi Hub Black which is available on Fibre 35 and Fibre 65, and the ‘award-winning Wi-Fi Hub’ which is available on Fibre 150 and Fibre 250. In reality, both Wi-Fi Hubs are the same from a technical perspective: they just differ very slightly in their cosmetic appearance (the latter has a grill on the front of the router, through which some red/brown copper plating is visible).

Aside from that, both devices offer dual-band Wi-Fi 5 technology (including 802.11ac Wave 2). There are 7 built-in antenna to optimise the performance of your network, giving 3×3 MIMO at 2.4GHz and 4×4 MIMO at 5GHz.

The following table shows a side-by-side comparison of the two hubs:

If you choose a full fibre plan, you’ll get an Amazon Eero router instead. This supports Wi-Fi 6 technology and is also mesh-ready, allowing you to easily extend the Wi-Fi coverage in your home. The Amazon Eero 6 Pro router (offered on Fibre 500 and Fibre 900) also supports tri-band Wi-Fi connectivity.

Meanwhile, if you sign up to TalkTalk’s Fast Broadband (ADSL) service, you’ll get their Super Router instead (Huawei HG633). This still supports dual-band Wi-Fi technology but with slower maximum speeds than on the Wi-Fi Hub. The 4 Ethernet sockets are also restricted to a maximum speed of 100Mbps.

TalkTalk’s fibre broadband service is currently available in more than 90% of UK homes.

The most widely available plans are Fibre 35 and Fibre 65. They make use of fibre-to-the-cabinet (FTTC) technology, where a fibre optic cable runs to a cabinet near your home. The final part of the connection is provided over a copper phone line.

If you choose TalkTalk’s Fibre 150 Ultrafast or Fibre 250 Ultrafast, this will use Gfast technology. This is currently available in around 10% of UK homes and gives you faster download speeds than available on fibre-to-the-cabinet (FTTC) broadband. 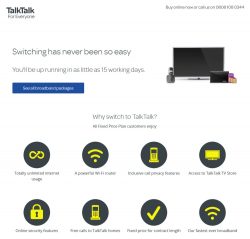 It’s easy switching your broadband provider to TalkTalk, regardless of your current internet provider.

Start by signing up for your new fibre broadband service on the TalkTalk website. Be sure to provide them with your current landline number if you’d like to move it to TalkTalk. During the online order process, TalkTalk will give you a switchover date for the service.

In advance of your new TalkTalk service going live, you’ll be sent your new Wi-Fi Hub router through the post. You’ll need to plug this in on the date that your new service goes live. Alternatively, an engineer will install it for you if you choose an Ultrafast (Gfast) plan.

For step-by-step instructions on how to switch to TalkTalk, please select your current broadband provider below:

You can also read our full guide to switching home broadband provider.

Your Comments 10 so far

We'd love to hear your thoughts and any questions you may have. So far, we've received 10 comments from readers. You can add your own comment here.