Hyperoptic offers full fibre broadband from £17.99/month with download speeds of up to 1Gbps and a Hyperhub router.

In the UK, Hyperoptic is a specialist provider of full fibre broadband, offering download speeds between 30Mbps and 1Gbps (1,000Mbps). All of their broadband plans come with a Hyperhub router (either the Nokia Hyperhub or the ZTE Hyperhub). You’ll also get unlimited downloads and an optional home phone service.

Hyperoptic was founded in 2011 and is now available in around half a million homes across 43 UK towns and cities. The service is mainly available in large residential apartment blocks where Hyperoptic has worked with the developer or freeholder to make their service available.

In this article, we’ll review the Hyperoptic broadband service including the plans available, the download speeds and and the Hyperhub routers. We’ll also look at the availability of Hyperoptic’s network and at other full fibre broadband services if you’re not able to get it where you live.

Hyperoptic offers full fibre broadband with plans from £17.99 per month and download speeds of up to 1Gbps.

In the UK, Hyperoptic offers full fibre broadband with average download speeds between 30Mbps and 1,000Mbps (1Gbps). The company offers a choice of five different plans, each one with a different download speed:

It costs an extra £2 to £3 per month to add a home phone service which comes with inclusive evening and weekend UK landline calls. There’s more information about this on the Hyperoptic website.

You’ll get the best value when taking Hyperoptic on a 12-month contract, with the exclusive 30Mbps deal offering the lowest monthly price of £17.99/month. This increases up to £35/month if you want the fastest-available Hyperfast plan with speeds of up to 1,000Mbps.

A one-month rolling version of Hyperoptic’s service is also available on the 50Mbps and faster plans. You’ll normally pay between £3/month and £7/month more to get this flexible one-month plan. It can be a good alternative if you want the added flexibility (e.g. if you’re staying in a short-term rental).

Full fibre services are different from other fibre broadband services which normally use fibre-to-the-cabinet technology (FTTC). With full fibre, the fibre optic connection extends all the way into your building. This means you can get faster speeds and a more reliable connection. For instance, the flagship Hyperfast plan (900Mbps-1Gbps) is around 15 times faster than a typical fibre-to-the-cabinet connection (67Mbps).

The download and upload speeds you’ll get on Hyperoptic depend on the price plan you choose:

Besides Hyperoptic, it’s also possible to get gigabit speeds on services such as BT Full Fibre, Virgin Media’s Gig1 Broadband and Vodafone’s Gigafast Broadband. For more information, see our guide to full fibre broadband and superfast and ultrafast broadband in the UK.

The main benefit of the Nokia Hyperhub over the regular ZTE Hyperhub is the improved Wi-Fi performance you can expect on it. It supports dual-band Wi-Fi 5 technology with total transfer speeds of up to 2,920Mbps. This consists of 2,170Mbps on 5GHz Wi-Fi (from 4×4 MIMO) and 750Mbps on 2.4GHz Wi-Fi (from 3×3 MIMO).

The Nokia Hyperhub supports wi-fi band steering so your devices will automatically choose the optimum band for performance and speed. It also supports automatic channel optimisation to reduce interference and works with Nokia’s Mesh WiFi technology, allowing you to extend your network with a Nokia Beacon 1 or Nokia Beacon 3.

In addition to the Wi-Fi functionality, the Nokia Hyperhub has 4 Gigabit Ethernet sockets for connecting wired devices to your home network and 2 USB ports for connecting external storage and printers. There’s also an RJ11 phone port for plugging in a telephone.

You can find the manual for the Nokia Hyperhub and further information on the Hyperoptic website. 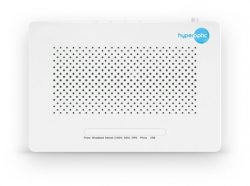 The following table shows a side-by-side comparison of the Nokia Hyperhub and ZTE Hyperhub routers:

Regardless of the router you get, Hyperoptic will send an engineer to install it for you after you sign up for the service. As part of this, they’ll need to drill a small hole above the front door of your property through which they’ll run a small cable. A Hyperoptic socket will then be fitted at the end of that cable along with the Hyperhub router that’s included in your plan.

Further information about the installation process can be found on Hyperoptic’s website.

All of Hyperoptic’s home broadband plans have unlimited data so there shouldn’t be any limits on how much you can download or upload. The system may, however, flag excessive users of the service. In this case, a warning message may be sent to you asking you to reduce your usage of the service.

This can be seen in Hyperoptic’s acceptable usage policy:

We don’t have a traffic management policy, although we may choose to use one in the future (with or without notice). But our system does flag excessive use and if we believe that your use of the internet, our Network or Services is so excessive that other customers’ Services are being harmed, then we may give you a written warning (by email or otherwise) to reduce your use. If you don’t do this, we may suspend or end your Services. 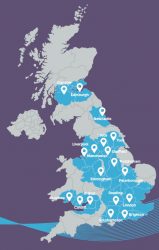 In the UK, Hyperoptic currently offers full fibre broadband to more than 500,000 homes across 43 UK towns and cities.

Where Hyperoptic is different from other home broadband services is they’re normally only available in larger residential apartment blocks. They work with freeholders and new build developers to offer their service in apartment buildings, with Hyperoptic’s online coverage map showing a list of available locations.

If you’re looking for full fibre broadband but are currently unable to get Hyperoptic in your home, you can check to see whether BT’s Full Fibre service is available (uses the Openreach network) or Vodafone’s Gigafast service (uses the Cityfibre network). Alternatively, Virgin Media’s Gig1 service can offer gigabit download speeds using cable instead of full fibre technology.