In the UK, Vodafone’s Gigafast Broadband service is now available in 15 towns and cities. Making use of full fibre technology, Gigafast Broadband offers download speeds of up to 910Mbps (around 14 times faster than Superfast 2 Broadband). You can get a Vodafone Pro Broadband plan with Gigafast speeds for £45/month.

In the UK, Gigafast is Vodafone’s fastest home broadband service. It offers download speeds of up to 900Mbps using full fibre technology, which is around 14 times faster than Superfast 2 (which uses fibre-to-the-cabinet technology). It’s currently available in 15 towns and cities, unlike the Superfast Broadband service which is available to more than 90% of UK homes. 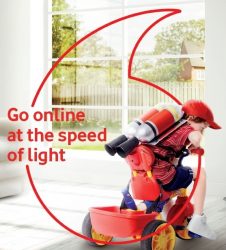 At present, Vodafone offers a choice of the following plans on full fibre (FTTP) broadband:

If you choose one of the Pro Broadband plans, you’ll also get Vodafone’s Super WiFi service included. This gives you a Super WiFi Booster with a guaranteed Wi-Fi signal in every room of your home. You’ll also get 4G-based broadband backup along with a number of other benefits like WiFi Xperts and inclusive security.

All of the Vodafone Broadband plans come on an 24-month contract and include a home phone line along with full fibre broadband. 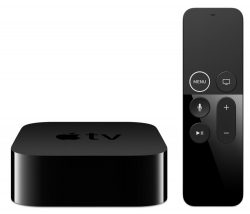 On Vodafone’s full fibre broadband, there’s currently a choice of four different plans. The entry-level plan has average download speeds of 100Mbps, increasing up to 200Mbps, 500Mbps and 910Mbps on the more expensive plans.

The upload speed available on your service depends on the area you’re in:

The average download speed and upload speed for each Gigafast broadband plan is summarised in the following table:

At present, Vodafone’s Gigafast broadband service is available to selected homes within the following 15 towns and cities:

If you’d like to check whether Vodafone Gigafast is available at your address, enter your postcode on Vodafone’s online availability checker.

If you’re not able to get Vodafone Gigafast where you live, you should still be offered a Vodafone Superfast broadband plan. You can get Superfast Broadband from just £20/month, with more than 90% of UK households able to get a Superfast service.

According to Vodafone, they’re currently in the process of rolling out Gigafast Broadband, with more than 3 million homes due to get it over the next year. 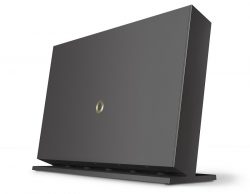 Customers signing up for Vodafone Gigafast Broadband will be provided with a Vodafone Wi-Fi Hub router (also known as VoX 3.0 or THG3000G). This supports dual-band Wi-Fi 5 technology (802.11ac) for wireless connectivity in your home. It also has 4 Gigabit Ethernet sockets for connecting wired devices to your network and a USB port for attaching external storage or devices.

The Hub can be managed through the Vodafone Broadband app which has features like the ability to prioritise devices on your Wi-Fi network (Device Boost), to schedule internet downtime for your family (WiFi Scheduler) and to create a separate network for guests.

For more information and for detailed specifications, see the Vodafone Broadband website.

If you’re looking for an alternative to Vodafone’s Gigafast broadband service, there are a number of other gigabit-capable services.

Other ultrafast broadband services may also be available (e.g. with speeds of up to 285Mbps using G.fast technology).

For more information about Vodafone Gigafast, please see Vodafone’s official website. You may also find it of interest to read our overview of Vodafone’s home broadband service.

Your Comments 46 so far

We'd love to hear your thoughts and any questions you may have. So far, we've received 46 comments from readers. You can add your own comment here.