On Vodafone plans with 4 Xtra Benefits, you can use your mobile phone at no extra cost in either 51 European destinations or 83 worldwide destinations.

For customers on a Vodafone Pay Monthly plan with 4 Xtra Benefits, this allows you to use your mobile phone at no extra cost in either 51 European destinations or 83 worldwide destinations.

In this article, we’ll review Vodafone’s Global Roaming service, including all of the countries it’s available in. We’ll also discuss download speeds whilst roaming and the fair usage policy before comparing it to alternative offers that are available for roaming on other networks.

What is Vodafone Global Roaming?

On most Vodafone price plans, it’ll be possible to use your mobile phone abroad through Vodafone’s Global Roaming service.

The following table shows an overview of the roaming service that’s available on each type of plan:

In the rest of this section, we’ll discuss the Roam-Free destinations, Vodafone’s Global Roaming Plus and the Roam-Further offering in more detail. 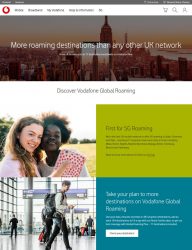 On all Vodafone price plans with the exception of Vodafone Basics, you can use your mobile phone at no extra charge in the Republic of Ireland and the Isle of Man.

The following countries are included within Vodafone’s 51 European roam-free destinations:

If your plan doesn’t qualify for the 51 European roam-free destinations, you’ll need to pay an extra £2/day to use your mobile phone in those places (with the exception of Ireland and the Isle of Man).

If you choose an unlimited data plan with 4 Xtra Benefits, you’ll get access to Vodafone’s Global Roaming Plus. This gives you a further 32 roam-free destinations where you’ll be able to use your mobile phone at no extra charge. Additional destinations covered by Global Roaming Plus include the USA, Canada, Australia, New Zealand, Mexico, South Africa and Turkey.

On plans with Global Roaming Plus, you’ll be able to use your normal UK allowances at no extra charge when travelling abroad in a total of 83 destinations. Phone calls can be made using your inclusive allowance both to local phone numbers and UK phone numbers whilst travelling. You’ll also be able to use your inclusive texts and data allowance whilst travelling abroad (up to a maximum of 25GB per month).

The following 32 destinations are included in Global Roaming Plus, in addition to the 51 Roam-free destinations already listed above:

You’ll be charged £6/day as soon as you make an outgoing phone call, send a text message or access mobile data on your phone. Each day is considered to run from midnight to 23:59, based on the time zone in the capital city of the country you’re visiting. Simply receiving a standard-rate phone call or an incoming text message is free and will not trigger the £6/day charge.

Roaming on Pay As You Go & VOXI

If you’re a customer on Vodafone Pay As You Go or Vodafone’s low-cost VOXI sub-brand, you’ll be able to use your mobile phone at no extra charge in Vodafone’s 51 Roam-free destinations. This includes other EU & EEA destinations.

Outside of the 51 Roam-free destinations, you’ll need to pay for your usage on a per-minute, per-text and per-megabyte basis. This is because the £6 Roam-further package is not available to Pay As You Go or VOXI customers. To give an example, customers visiting a Rest of World Zone 1 destination will pay 60p/minute to make an outgoing phone call, 36p/minute to receive a phone call, 8p to send a text message and 12p/MB to use mobile data. You can check the charges for your destination of the Vodafone or VOXI websites.

Sadly, it isn’t possible to get around the limitation to enable roaming on a Vodafone Basics SIM card. You could however decide to upgrade to a Vodafone Red or Vodafone Unlimited plan before departing on your trip abroad. Alternatively, get a SIM card from VOXI for your trip abroad, setting up call forwarding from your Vodafone Basics phone number so people will still be able to reach you whilst you’re away.

On Vodafone, you can access international roaming with 4G download speeds in 137 destinations. This is significantly more than on other UK networks. You’ll also get “full speed roaming on 4G” without any throttling or restrictions on download speed (except from on the Unlimited Lite and Unlimited plans, which have a 2Mbit/s and 10Mbit/s download speed limit).

In most other destinations without access to 4G roaming, you’ll still have access to international roaming at 3G speeds.

You can enter the destination you’re travelling to on the Vodafone website to see whether 4G roaming is available in that country.

If you’re using a Vodafone price plan with access to 5G, you’ll be able to roam on 5G when travelling to 193 towns and cities across Europe.

5G roaming is currently available in a number of major towns and cities across Spain, Italy and Germany (including Milan, Rome, Naples, Madrid, Barcelona, Malaga, Berlin, Hamburg and Munich).

There are three key limits worth being aware of when using Vodafone’s Global Roaming service:

On Vodafone Pay Monthly plans, it isn’t possible to opt-out of the £6/day Roam-further offer.

As an alternative to Vodafone’s Global Roaming service, you could also consider the following roaming offers from other mobile networks:

In addition to the above, most UK mobile networks continue to offer international roaming in EU countries at no extra cost.

If you’re switching from another mobile network to Vodafone so you can take advantage of their Global Roaming service, it’s a straightforward process to keep your current phone number.

To do so, you’ll need to request a PAC Code from your current network. You can normally get one straight away through your mobile network’s website or app. Alternatively, text PAC to 65075 and you’ll get a PAC Code sent back to you via text message.

Once you’ve gotten the PAC Code from your current network, order your new phone or SIM card from the Vodafone website. Once it arrives, enter your PAC Code through Vodafone’s online form. Your phone number transfer will then normally take place on the next working day.