Sky Ad Skipping Pack Review: How Does It Work & Is It Worth Getting It?

The Ad Skipping TV pack allows you to fast-forward adverts on Sky Glass and Sky Stream. Find out how it works and the limitations of it. 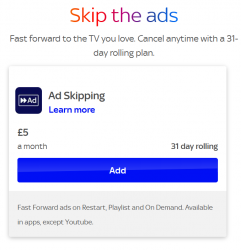 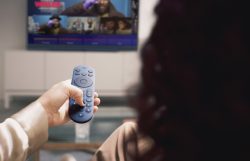 If you’re a Sky TV customer with the £5 per month Ad Skipping pack, you’ll be able to fast-forward adverts when using the following features:

Ads can be fast-forward at up to 30x speed, either using the buttons on your remote control or using the voice control feature. If you’re using your remote control, it can be a bit of a faff as you’ll need to watch very closely to make sure you don’t miss the start of the programme. As an alternative, you can be a bit more precise when you use the voice control feature (e.g. using a voice command like “Hello Sky, skip 3 minutes”).

You’ll still get adverts when you watch live TV broadcasts. However, you’ll be able to fast-forward through them when you use the Live Pause feature (up to the current live broadcast). However, this fast-forward feature in Live Pause is available for all customers, regardless of whether you have the Ad Skipping pack.

The Ad Skipping pack is not available if you’re a Sky Q customer (if you get Sky TV channels through your satellite dish). On Sky Q, you can record up to 500 hours of television. Your Sky Q subscription will then allow you to fast-forward through these recordings as required. 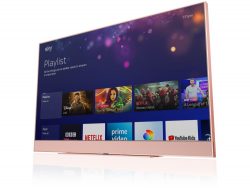 The Sky ad skipping pack is not compatible with other third-party apps such as Spotify and YouTube. You’ll need a separate subscription to remove adverts from these apps (e.g. Spotify Premium and YouTube Premium). In other cases (e.g. with BBC iPlayer and Netflix), the service is ad-free to begin with.

Is The Ad Skipping Pack Worth It?

Is it worthwhile getting the ad skipping pack? This really depends on what you watch and how much you’re willing to put up with some adverts.

If you often like to watch content from your playlist, Sky’s on-demand service, ITVX or All4, the ad skipping pack is more worthwhile and might be worth considering (particularly for watching Sky’s own content).

If you mainly want the ad skipping pack for ITVX or All 4, you could consider getting an ITVX Premium or All 4+ subscription instead. With ITVX Premium, you’ll be able to watch ITVX without any adverts. You’ll also get access to premium content such as box sets from BritBox for £5.99 per month (this is just 99p more than Sky’s ad skipping pack). Meanwhile, All 4+ is available for £3.99 per month. This makes it a bit cheaper than Sky’s ad skipping pack, though much more limited in scope (as it only removes adverts from the All 4 service).

Sky’s ad skipping pack is available on a rolling 31-day contract so you can add it or remove it from your account at any time. For this reason, we’d normally recommend signing up to Sky without the ad skipping pack (as you can always add it on at a later date if you find that you need it).

For extra savings, consider taking Sky Broadband together with Sky TV. At present, it’s possible to get a combined package from £41 per month (plus an extra £5 per month if you want the optional ad skipping pack).