Vodafone offers 5G coverage in 100 UK locations, along with 99% population coverage on 4G, 3G and 2G.

In this article, find out how to check the Vodafone coverage in your area and how to see a Vodafone coverage map for 5G, 4G, 3G and 2G. We’ll discuss the differences between the four types of coverage, what you’re able to do with them and the download speeds available. Finally, we’ll look at the international coverage on Vodafone and how you can use it when travelling abroad.

You can use Vodafone’s online coverage checker to see a map of the different types of coverage available from Vodafone in your area.

Enter your postcode on Vodafone’s online map for an indication of whether the four types of coverage (5G, 4G, 3G and 2G) are available in your area. The results are colour-coded to break out different strengths of coverage (e.g. areas with both indoor & outdoor coverage, with outdoor coverage only or with very limited coverage).

You can also see a forecast of the download speeds and upload speeds that might be available in your area. This is available when you tap on the “Data speed info” button after entering your postcode.

For more information, read on to find out about the different types of coverage available on Vodafone.

All Vodafone customers are now able to access 4G, 3G and 2G coverage. This offers a solid foundation of 99% population coverage and download speeds of around 23-35Mbit/s (this is plan dependent as download speeds are capped on some Vodafone unlimited data plans).

To access 5G coverage on the Vodafone network, you’ll need a 5G-ready handset and a price plan that supports 5G. At present, 5G is available on Vodafone Red price plans with at least 5GB of data per month and all Vodafone Unlimited plans (albeit, with speed limits on the Unlimited Lite and Unlimited tariffs).

In the UK, Vodafone also provides the coverage for VOXI, Talkmobile and Lebara Mobile. 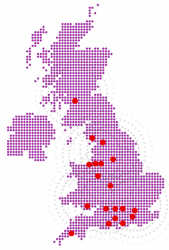 The newest form of coverage available on Vodafone is their 5G network, which started rolling out in July 2019. Today, Vodafone’s 5G network covers 100 locations (mostly large urban areas with a handful of smaller towns and airports).

On Vodafone’s 5G network, peak download speeds can exceed 1Gbit/s (1,000Mbit/s). In practice, however, Vodafone claims an average download speed of 150-200Mbit/s on 5G (around five to ten times faster than their 4G network). Other benefits of the 5G network include greater network capacity and reduced amounts of latency.

Vodafone’s 5G network is currently available in the following UK towns and cities: 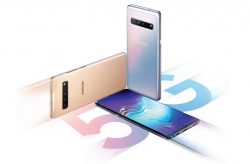 Behind the scenes, Vodafone is making use of newly acquired 3.5GHz spectrum to enable the faster speeds of their 5G service. Their 5G network also uses “Massive MIMO” technology to further improve download speeds, to increase network capacity and to reduce interference. Latency is reduced on the network by making use of faster radio processing and multi-access edge computing technology. See Vodafone’s guide to 5G for business for more in-depth information about the benefits of 5G.

At present, 5G coverage is available on all Vodafone unlimited price plans and on Vodafone Red price plans with at least 5GB of data per month. Download speeds are capped on the Unlimited Lite and Unlimited plans (2Mbit/s and 10Mbit/s respectively) but you can still benefit from the increased network capacity and reduced latency of Vodafone’s 5G network. The Unlimited Max price plan gives you unlimited data with uncapped download speeds on Vodafone’s 5G network. Unfortunately, 5G coverage isn’t currently available on other types of plans like Vodafone Basics.

Alongside their new 5G network, Vodafone continues to offer nationwide 2G, 3G and 4G coverage. They also have a 4G Calling and Wi-Fi Calling service which is available to use on selected price plans and handsets.

Vodafone’s oldest type of coverage comes from their 2G mobile network, which has been in operation since 1993. Nowadays, the 2G network is rarely used by consumers. However, it’s still available as a backup for when newer types of coverage are not available.

2G coverage is primarily suited for making phone calls and for sending SMS text messages. It’s also possible to do a bit of basic web browsing at EDGE speeds (up to 0.3Mbit/s) on Vodafone’s 2G network.

Vodafone offers 99% population coverage on their 2G network using spectrum at 900MHz. In the past, they’ve also offered some limited 2G coverage at 1800MHz. However, this has now been switched off as the 1800MHz signal has been upgraded to provide extra 4G coverage. 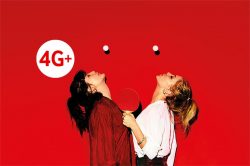 In practice, actual download speeds on 4G are normally closer to 23-35Mbit/s. However, this can vary substantially depending on your area so it’s worth checking this through Vodafone’s online coverage map:

At the time of writing, you can use Wi-Fi Calling on the following handsets:

If you’re using an Android-powered smartphone, it will normally need to have been purchased directly from Vodafone to work on their Wi-Fi Calling and 4G Calling service. It might not work on devices purchased elsewhere e.g. from the Carphone Warehouse. This restriction doesn’t apply if you’re using an iPhone, which will work regardless of which retailer you buy it from.

If you’re travelling abroad to another country, you can use Vodafone through their Global Roaming service (excluding Vodafone Basics which is a UK-only plan).

You can get 4G roaming in 137 destinations on Vodafone (significantly more than any other UK network). You’ll also get “full speed roaming on 4G” without any throttling or restrictions on download speeds (except from on the Unlimited Lite and Unlimited plans which are also speed-capped in the UK).

If you have a 5G-ready price plan, it’s also possible to roam on 5G in nearly 200 towns and cities across Europe. This includes major towns and cities in Spain, Italy, Germany and the Republic of Ireland (including Milan, Rome, Naples, Madrid, Barcelona, Malaga, Berlin, Hamburg and Munich).

With Global Roaming, most Vodafone customers can use their handset abroad at no extra charge in 51 Roam-free European destinations. In 104 Roam-further destinations, it will cost £6/day to use your normal UK price plan.

If you have a Vodafone Unlimited Max plan, you’ll get Vodafone’s Global Roaming Plus service instead. This gives you inclusive roaming in 81 destinations (including most of Europe, the USA, Canada, Mexico, Australia, New Zealand, Turkey and more).

The following table summarises the cost of international roaming on Vodafone:

For more information about the coverage on Vodafone, please see Vodafone’s official website. We’d always recommend using Vodafone’s online coverage map to check the coverage in your area before signing up to Vodafone.