If you’re looking for 5G home broadband in the UK, the chances are you’ll be provided with a Huawei 5G CPE Pro router to use on the service.

At present, the Huawei 5G CPE Pro router is available on EE’s 5GEE Home, on Three’s 5G home broadband service and on Vodafone’s GigaCube 5G. It’s also possible to buy an unlocked 5G CPE Pro from Amazon but it’s worth noting this is a slightly different model with extra bands and slower wi-fi (you’ll get the H112-372 rather than the H112-370 when buying the unlocked device).

In this article, we’ll review the Huawei 5G CPE Pro router, including how you can use it and the price plans available. We’ll also take an in-depth look at individual features of the router including mobile connectivity & 5G download speeds, home network connectivity including wi-fi and the design of the router.

What is the Huawei 5G CPE Pro?

The Huawei 5G CPE Pro is a popular 5G home broadband router. The device allows you to access high-speed 5G broadband with download speeds of up to 1Gbit/s or more available on the router. You can use 5G home broadband wherever 5G coverage is available. Unlike traditional broadband, there’s no need for a phone line or cable, making it possible for you to use it in places where fibre broadband isn’t normally available.

The name of the product, 5G CPE, stands for 5G Customer Premise Equipment. By this, Huawei means you’re able to install just one device in your home in order to benefit from a 5G connection across all of your wi-fi enabled devices. The router receives a signal from your 5G mobile network and then broadcasts a wi-fi network from it that your other devices can connect to. For instance, you’ll be able to use the 5G broadband connection on your laptop, tablet, smartphone, smart TV and other smart home devices (the only requirement is that your devices are able to connect to wi-fi or a wired Ethernet connection).

Because the 5G CPE Pro doesn’t rely on a landline or cable connection, it’s easy to set it up yourself without an engineer visit. Simply insert a 5G SIM card into the device and plug it in to a mains power connection to start using 5G broadband.

On EE and Vodafone, the router will belong to you once you’ve signed up for the service. Meanwhile, on Three, the 5G CPE Pro router is only leased to you. This means you’ll need to return the router to Three once you cancel the service.

For more information, please see our in-depth reviews of EE’s 5GEE Home, Three’s 5G home broadband service and Vodafone’s GigaCube 5G. You can also see the official webpages from EE, Three and Vodafone for information about the individual deals. 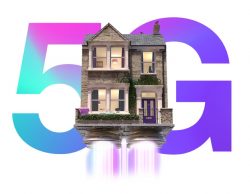 As an alternative to getting the Huawei 5G CPE Pro on a broadband plan from EE, Three or Vodafone, it’s also possible to buy the router on a SIM-free basis.

An unlocked Huawei 5G CPE Pro router will cost you around £410 at Amazon.co.uk. This is obviously a lot of money to spend upfront on a router. However, once you’ve bought an unlocked router, you’ll be able to use any 5G SIM card inside it. For instance, the following table shows 5G-ready plans with unlimited data:

Over time, it may work out to be comparable in cost getting a home broadband plan and getting your router on a SIM-free basis. To give an example, Vodafone charges £50/month plus £50 upfront for the Huawei 5G CPE Pro (GigaCube 5G) with unlimited data. Over the course of your 18 month contract, the total cost of ownership is £950. Compare this to paying £410 upfront for an unlocked router and then £30/month for Vodafone’s Unlimited Max SIM card. Here, the total cost of ownership over 18 months also come to £950.

When you buy the Huawei 5G CPE Pro on a plan from EE, Three or Vodafone, you’ll receive the version of the product with the model number H112-370. This is the optimum version of the product for use in the UK market. It has support for the n78 frequency band (3500MHz) which is used by all of the 5G networks in the UK. You’ll also get support for Wi-Fi 6 (802.11ax) with 4×4 MIMO. This supports speeds on wi-fi of up to 5,100Mbit/s.

When you buy the Huawei 5G CPE Pro on an unlocked basis (e.g. from Amazon.co.uk), you’ll get the H112-372 version of the router instead. This supports a couple of extra 5G frequencies (bands n41, n77 and n79). These are not currently used in the UK, but can potentially be useful if you’re travelling abroad with the router and planning to use it in China, Japan, the USA or a few other countries in Asia. On the flip side, you’ll get slower Wi-Fi 5 (802.11ac) connectivity and you’ll also lose an RJ11 phone port from the device.

Through the rest of this article, we’ll be reviewing the Huawei 5G CPE Pro in more detail for each area. 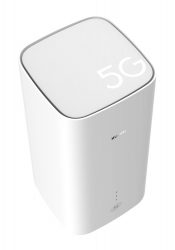 The 5G CPE Pro is powered by a HiSilicon Balong 5000 chipset (this is also used in the Huawei Mate 20X 5G smartphone). In theory, you can get download speeds of up to 2.3Gbit/s (2,300Mbit/s) on the router, though present-day 5G networks will normally cap out at around 1Gbit/s. You can expect an average download speed of around 150-200Mbit/s when using the router on a 5G network. This is a good order of magnitude faster than 4G broadband, giving you download speeds that are even faster than standard fibre broadband connections. As well as supporting 5G networks, the router can also fall back onto 4G networks with up to Category 19 LTE speeds.

The router has its own built-in internal antenna for connecting to 4G and 5G networks. However, it’s also possible to attach an external antenna to the device using the two TS9 connectors at the back of the router. An external antenna can sometimes help to improve the speed and reliability of your broadband connection. One downside is that the Huawei 5G CPE Pro uses TS9 connectors instead of the more common SMA connector. It helps to save a little bit of space as the TS9 socket is smaller, but it also makes it a little easier for the antenna connection to come loose. Thankfully, however, you can buy a SMA-to-TS9 adapter fairly easily, allowing you to use a regular SMA antenna.

On the Huawei 5G CPE Pro, you can share your 5G home broadband connection with up to 64 devices at one time using wi-fi connectivity. The router broadcasts a wi-fi network that your other devices can connect to (including your laptop, tablet, smartphone, smart TV or other smart home devices). This works in much the same way as any other broadband router and you’ll still be able to connect all of the same devices and to do the same things on it. Huawei offers a free application called Huawei SmartHome which can be used for managing your router and optimising the location of the router in your home.

As well as wi-fi connectivity, you’ll also get 2 Gigabit Ethernet sockets for connecting wired devices to your network (one LAN port and one WAN/LAN port). You’ll also get an RJ11 phone port on the H112-370 version of the router.

The two versions of the router differ as follows: 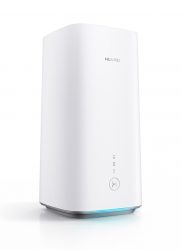 The Huawei 5G CPE Pro has a modern design, sometimes described as resembling a Greek column. The router itself is in the shape of a tower, instead of the more traditional rectangular form factor used by most other routers. This is an evolution on from the Huawei B618 and the Huawei AICubeB900, both of which also had a tower-shaped design.

The router itself measures 99mm x 107mm x 215mm and weighs 700g (plus a little bit extra for the power adapter). It certainly isn’t something you’ll be able to carry around in your pocket, but it should comfortably fit in a handbag or backpack if you’d like to bring it with you to use in a different location.

The front of the device has a fairly discrete logo from Huawei along with three LED indicator lights for 5G, 4G and wi-fi. There’s also a WPS (Wi-Fi Protected Setup) button, making it easy for devices to join your wi-fi network without the need to enter a password.

On the back of the router, you’ll find two Gigabit Ethernet sockets along with a slot for your nano-SIM, two TS9 external antenna connectors, a socket to attach your power adapter and an on/off power button. There’s also an RJ11 phone port on the H112-370 version of the device.

The base of the Huawei 5G CPE Pro has a small sticker with your wi-fi network connection details and password along with the login details for the router administration interface.

Your Comments 59 so far

We'd love to hear your thoughts and any questions you may have. So far, we've received 59 comments from readers. You can add your own comment here.