In the UK, Three offers 5G, 4G and 3G mobile network coverage. The fastest and most advanced form of coverage is Three’s 5G network which is now available in 194 UK towns and cities. This can give you average download speeds of around 200Mbps, with peak speeds of up to 1,000Mbps (1Gbps).

In this article, we’ll discuss how you can check the coverage available from Three in your area, including where you’re able to see a coverage map for 5G, 4G and 3G. We’ll then discuss each coverage type in more detail, before looking at Three’s home broadband coverage and the international coverage you can expect when abroad.

The easiest way to check the coverage from Three in your area is by using their online coverage map. You can enter your postcode on the map to see an indication of whether 5G, 4G and 3G coverage are available. You can also see the different levels of coverage available (e.g. indoor coverage and outdoor coverage).

We’d strongly recommend using Three’s online coverage checker before you sign up to a new contract with Three. For the most accurate results, you should also enter the name of the device you’re using on Three’s network:

You can use the tabs on Three’s online coverage checker to switch between 5G, 4G and 3G coverage maps.

For further information, continue reading on through the rest of this article to find out more about the different types of coverage available on Three. We’ll also discuss the things you’re able to do with each type of coverage and the download speeds available.

In the UK, Three currently offers 5G, 4G and 3G coverage, with varying amounts of the population covered by each one:

You can access all three types of coverage on any price plan from Three, providing you have a device that’s compatible with it.

For instance, Three offers 5G at no extra cost to all of their mobile network customers. You can therefore access 5G coverage if you’re using a 5G-ready device. This differs from many other networks where you’ll normally need to have a specific 5G-ready plan.

Notably, Three is the only UK mobile network not to offer any 2G coverage. This shouldn’t make a major difference to most users, unless you’re using an older 2G-only phone. In addition, some dual-SIM smartphones may not work correctly on Three if the secondary SIM card slot only supports 2G coverage.

Three also provides the underlying coverage for a number of other networks including iD Mobile, Smarty and Superdrug Mobile. 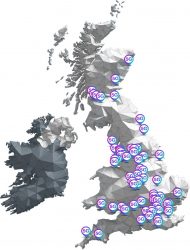 Three’s 5G network is their fastest and most advanced form of coverage.

Currently available in 194 UK locations, it gives you an average download speed of around 200Mbps. In some cases, the peak download speeds on 5G can go even faster – up to 1,000Mbps (1Gbps) in some cases.

The following towns and cities currently have access to 5G coverage on Three:

You can see our Three 5G coverage map for a complete list of locations with 5G coverage on Three. It will also help you to see where 5G coverage is available in your area.

Three claims to be “building the UK’s fastest 5G network”. Their basis for this claim is the fact they hold the largest amount of usable 5G spectrum across all UK coverage providers. The amount of spectrum is an important determinant for the speed and capacity of a 5G network.

In total, Three has 140MHz of usable 5G spectrum, compared to 50MHz for Vodafone and 40MHz for EE and O2. This allows them to deploy a single 5G carrier of 100MHz which can offer peak download speeds up to twice as fast as that available on other networks. 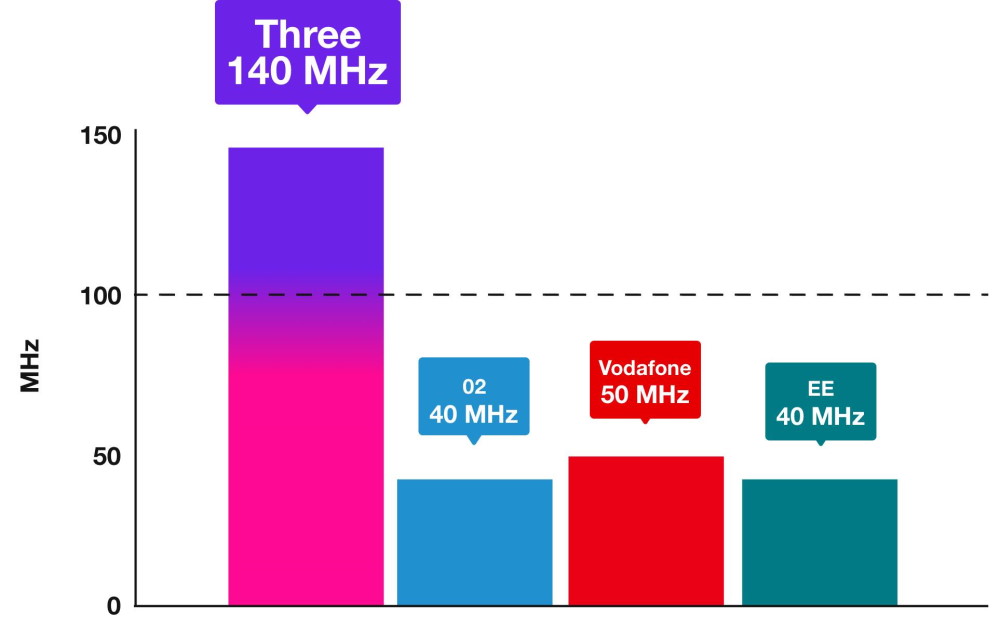 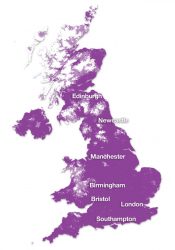 Three’s 4G mobile network launched in December 2013 and now covers 99.8% of UK’s population. It can offer download speeds of up to 300Mbps, with an average download speed in the region of 20Mbps.

Historically, Three’s 4G network has mainly used band 3 (1800MHz) 4G spectrum. However, the 4G network has seen major upgrades over the past few years including the rollout of 4G Super-Voice (also known as 4G Calling or VoLTE) across the entire 4G network.

In 2019, Three started a four-year programme to upgrade their 4G coverage across the UK. Three says this upgrade will boost their network capacity and download speeds by up to 150%. They’re doing this by upgrading older 3G spectrum to 4G. This will introduce additional 4G coverage at band 1 (2100MHz). Additionally, 6,000 sites (mainly situated in busy urban areas), will get additional supplementary 4G coverage at band 32 SDL (1400MHz).

Three was the UK’s first mobile network to launch a 3G service, all the way back on the 3rd March 2003. Over the following 17 years, the 3G network has grown from humble beginnings to now covering 98.7% of the UK’s population.

Today, Three’s 3G mobile network is used to carry phone calls, text messages and data. Normally, your mobile phone will only connect to 3G networks when 4G coverage isn’t available in your area.

In addition, some mobile phones will drop back to 3G coverage whenever you’re making or receiving a phone call (this is unless you’re using 4G Calling or Wi-Fi Calling). For this reason, it’s best to live in an area where you’re able to get both 3G and 4G coverage from Three.

The coverage area for Three’s home broadband service is smaller than that for their mobile service. This is because they only offer home broadband in selected areas with sufficient coverage and capacity. If you’re unable to get 4G or 5G home broadband from Three, you can always get a 4G Plus MiFi instead. This gives you 4G broadband with the additional benefit of being able to use it on the go. Alternatively, Three’s unlimited data SIM cards will also work inside a 4G router such as an unlocked Huawei B311 or Huawei B535.

You can check Three’s home broadband coverage by entering your postcode on this page:

If you’re travelling abroad to another country, it’s possible to use your mobile phone through Three’s international roaming service.

For customers travelling to one of 71 destinations (including most European countries, the USA, Australia and more), Go Roam allows you to use your mobile phone abroad at no extra charge. This is available to customers on both Pay Monthly and Pay As You Go.

If you’re travelling to a country that isn’t a Go Roam destination, additional charges will apply for using your mobile phone abroad. In some countries, there’s a Data Passport add-on which will give you unlimited data abroad for £5 per day. The Data Passport is currently available in Azerbaijan, Canada, Malaysia, Mexico, Moldova, Myanmar, Pakistan, Russia, Saudi Arabia, South Korea, Taiwan, Thailand, Tunisia, Turkey and the United Arab Emirates.

For more information, see our guide to Three’s Go Roam offer. Alternatively, you can check the international coverage maps through Three’s website.

Please see Three’s official website for further information about their network and coverage. You can also read our full guide to 5G on Three.