A NOW Membership gives you access to Sky TV channels like Sky Atlantic, Sky One, Sky Cinema & Sky Sports. Find out what you get with a NOW Membership.

In the UK, NOW (previously known as NOW TV) gives you access to the Sky TV channels online.

Using your NOW Membership, you can stream live television channels along with on-demand box sets, movies and TV shows wherever you are. This is all available through your internet connection, with no need for a satellite dish or a special cable to your home.

Customers with a NOW Entertainment Membership can stream more than 300 box sets online. This includes Sky Originals, US comedy and HBO drama (see the highlights here).

From the the 8th June 2021, you’ll also get access to more than 1,000 episodes of kids television included on the Entertainment membership. This is available through the dedicated kids TV section of the NOW app.

Alongside the on-demand episodes and shows, you’ll also have access to the following live television channels through your NOW Entertainment membership:

The best value way of getting a NOW Entertainment membership is together with NOW Broadband from £27.99 per month:

The NOW Cinema Membership allows you to stream more than 1,000 movies on-demand. The catalogue includes a large number of award-winning movies along with Sky Originals and classics.

Alongside the on-demand streaming service, you’ll have access to the following 11 live Sky Cinema channels:

From time-to-time, some of the Sky Cinema channels will be temporarily rebranded to focus on a certain season or event. For instance, there’s normally a Sky Cinema Christmas channel at the end of each year. They’ve also recently had dedicated channels for Harry Potter, Lord Of The Rings, musicals, feel good films, superheroes and more.

You can get a NOW Cinema membership together with NOW Broadband from £22.99 per month:

It’s also possible to get a NOW Cinema membership without getting NOW Broadband at the standard price of £9.99 per month.

A NOW Sports Membership allows you to watch the Sky Sports channels online. This includes Premier League football along with international cricket, golf, F1 and more. You can also stream more than 1,000 hours of sporting highlights and documentaries on-demand with your NOW Sports Membership.

The NOW Sports Membership gives you access to the following 11 Sky Sports channels:

You can get a NOW Sports Membership together with NOW Broadband from £43 per month:

In the past, the NOW Sports Membership was known as the NOW TV Sky Sports Pass. For more information, see our guide on the cheapest way to get Sky Sports in the UK.

For an extra £5/month, you can add the NOW Boost add-on. This gives you better quality viewing along with ad-free streaming and the ability to watch on multiple devices at the same time.

The following features are available to customers with a NOW Boost:

How Do I Watch NOW TV? 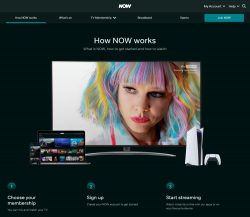 The NOW TV service is available to stream online so there’s no need for a satellite dish or cable connection. You can just sign up for your NOW membership online to start streaming from a compatible device using an internet connection.

You can access your NOW membership on a range of devices including your smart TV, games console, smartphone, tablet and laptop. A full list of compatible devices can be found on the NOW website:

You can stream on up to 3 devices at the same time if you have a NOW Boost add-on (1 device at a time if you don’t have the Boost).

For more information, please see the official NOW website. You may also find it useful to read our in-depth NOW Broadband review.