Vodafone offers 4G mobile broadband from £11/month, allowing you to get connected to the internet on up to 10 devices.

In the UK, Vodafone offers a 4G mobile broadband service allowing you to get connected to the internet on up to 10 devices at the same time. With 99% 4G population coverage and download speeds of up to 150Mbit/s, the service can be a useful alternative to home broadband especially if you’re struggling with slow internet or poor wi-fi at home. It can also be useful for working from home, using video conferencing or for keeping the kids entertained.

In this article, we’ll review Vodafone’s mobile broadband service including the devices and price plans available. We’ll also look at the download speeds and coverage available on the service. 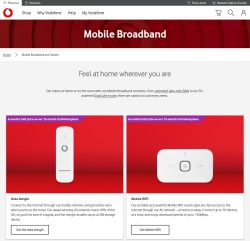 In the UK, Vodafone’s 4G mobile broadband service gives you access to high-speed broadband internet on up to 10 devices at the same time. With 99% population coverage, download speeds of up to 150Mbit/s, and a choice of flexible one-month or 12-month plans, it can be a useful addition or alternative to your regular home broadband service.

Unlike Vodafone’s regular fixed-line home broadband (including Superfast Broadband and Gigafast Broadband), Vodafone’s 4G mobile broadband service doesn’t rely on a phone line. This gives you the flexibility to use it in more places – whether that’s at home or outside at a different location. You can even use it abroad in 51 destinations at no extra cost through Vodafone Global Roaming (or in 81 destinations if you have an Unlimited Max price plan).

In the following sections, we’ll review each of the two mobile broadband devices in more detail. 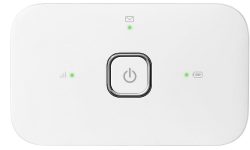 For most people, we’d recommend the Vodafone R219 mobile wi-fi hotspot as the best device for getting online through Vodafone’s mobile broadband service.

The R219 hotspot allows you to get up to 10 devices connected to the internet at the same time. It connects to Vodafone’s 4G network, offering Category 4 LTE download speeds of up to 150Mbit/s. Using the 4G signal, it then broadcasts a regular wi-fi network for your other devices to connect to. This means it should work with any wi-fi enabled device including your laptop, tablet, smartphone, smart TV, games console and more.

Weighing just 95g, the Vodafone R219 is designed to be a portable device that you can easily carry in your pocket. It has a built-in battery with a capacity of 1,500mAh (enough for up to 6 hours of active usage on one charge). The battery can be topped up using a micro-USB cable and charger which is provided in the box.

You can currently get the Vodafone R219 on the following mobile broadband plans from Vodafone:

For more information on the R219 including detailed specifications, please see the Vodafone website. 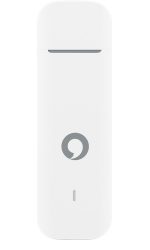 As an alternative to the R219 mobile wi-fi hotspot, Vodafone also offers the K5161 USB data dongle. This is a simpler device compared to the R219, allowing you to use mobile broadband on only one device at a given time (your laptop).

The main advantage of choosing a K5161 USB data dongle is the fact it’s lighter and more portable than a R219 hotspot. Weighing just 35g, it’s around one-third of the weight of a R219 hotspot. There’s also no need to charge the device or to carry around a charging cable for it – simply plug it in to the USB port on your laptop to use it. The dongle also has a built-in micro-SD card reader. This allows you to transfer files between different devices.

The main disadvantage of the K5161 data dongle is that it can only be used on one device at a time. This needs to be a laptop with a spare USB port, running on Windows 7 and later or Mac OS X 10.9 and later. It isn’t possible to use the dongle with other types of device like your tablet, smartphone or games console.

The following table shows a list of available mobile broadband plans for the Vodafone K5161. Broadly speaking, these are very similar to the price plans on the R219 hotspot. However, you can save £5 on the upfront cost if you choose to take the K5161 dongle on a 1-month rolling plan:

Please see the Vodafone website for full details about all of their mobile broadband SIM cards.

If you’re looking for a new 4G tablet on which to use Vodafone’s mobile broadband service, they also sell a range of iPads along with tablets from Samsung and Huawei.

Both the Vodafone R219 mobile wi-fi hotspot and the Vodafone K5161 data dongle support Category 4 LTE speeds (up to 150Mbit/s download and up to 50Mbit/s upload). In practice, however, the actual download speeds you get will depend on the coverage available in your area. It may also be affected by the number of other people using the service in your area.

For an estimate of the download speeds available, enter your postcode on Vodafone’s online coverage map. You can tap on the “data speed info” button after entering your postcode to see a range of speeds that will likely be available.

Customers using their own mobile broadband device with Vodafone’s data-only SIM card may be able to access even faster speeds than what is available on the Vodafone R219 and K5161. For instance, 5G speeds are available on a data-only SIM if you have a 5G device and are living in a 5G coverage area.

On Vodafone’s mobile broadband service, you’ll have access to 99% population coverage in the UK on Vodafone’s 2G, 3G and 4G networks.

Before signing up to Vodafone mobile broadband, we’d strongly recommend double-checking the coverage in your area. You can do this by entering your postcode on Vodafone’s online coverage map:

It’s worth checking the coverage on Vodafone in all of the places where you’d use your mobile broadband service (e.g. at home and at work).

If you’re using a 5G-ready device with a mobile broadband SIM card, it may also be possible to access 5G coverage on Vodafone.

For more information, see our in-depth guide to coverage on Vodafone or our overview of how mobile coverage works in the UK.

If you’re travelling abroad, you can use your mobile broadband service through Vodafone Global Roaming.

On all mobile broadband plans, it’s possible to roam at no extra cost when travelling to one of 51 European destinations (capped at a maximum of 25GB per month on unlimited data plans).

On the Unlimited Max price plan, you can roam at no extra cost in 81 international destinations with Global Roaming Plus. This includes most European countries along with the USA, Canada, Mexico, Australia, New Zealand, Turkey and more.

In most other countries, it will cost you £6/day to use your Vodafone mobile broadband service as part of the Roam-further offer.

Your Comments 36 so far

We'd love to hear your thoughts and any questions you may have. So far, we've received 36 comments from readers. You can add your own comment here.