Compare Mobile Phone Size: Is Your Next Smartphone Too Big?

Will your next smartphone be too big? This interactive guide shows you a side-by-side comparison of mobile phone sizes.

Smartphones seem to be increasing in size all of the time. The latest generation of high-end smartphones have grown to encompass 5-inch displays at full HD resolution (this includes the Samsung Galaxy S4 and the Sony Xperia Z). Whilst bigger displays are great for browsing the web and using apps, it can sometimes be unwieldy to use a bigger phone for calling. An oversized phone can also be awkward to carry in a pocket.

Using the list on the left, choose the smartphones that you'd like to compare the size of.

What is the right size for a smartphone?

The “right” size for a smartphone is a matter of personal preference. 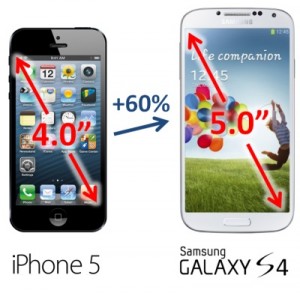 There are various benefits to having a bigger phone:

There are also disadvantages to having a large smartphone:

How To Measure Display Size.

To get an idea of real-world phone size, try selecting the “Show Full Size” option when comparing phones above.

What is the resolution of a display?

On high-end smartphones, you’ll typically find a “High Definition” 720p display (1280×720 pixels) or a “Full HD” 1080p display (1920×1080 pixels). Mid-range smartphones will have a typical resolution of 800×480 pixels. On an entry-level smartphone, the resolution of the display is likely to be even lower. This can cause “blockiness” and lack of detail on the image.

What does pixel density (ppi) mean?

Pixel density refers to how closely individual pixels are spaced. It’s typically measured in “pixels per inch” (ppi for short) where a higher ppi means sharper and clearer images.

The iPhone 5 has a 326ppi “Retina” display. This has long been held up as the “gold standard” for displays: Apple claims that it’s fairly close to the limits of what humans can observe. At typical viewing distances, you shouldn’t be able to see individual pixels on a Retina display.

Although the iPhone 5 has a great display, it’s recently been outclassed by many other devices that have a higher pixel density. Samsung’s Galaxy S4 has a 441ppi display. The HTC One has a 469ppi display whereas the Sony Xperia Z has a 441ppi display. It’s argued that someone with perfect vision can see details up to 720ppi when holding their smartphone at a distance of 30cm.