Virgin Media Stream gives you up to 108 channels on a monthly rolling contract. You’ll also get 10% cashback on streaming subscriptions like Netflix and Disney+.

In the UK, Virgin Media Stream is a new internet-connected television service, giving you both live television and on-demand entertainment through a set-top box. It’s available exclusively to Virgin Media broadband customers.

In this article, we’ll review Virgin Media Stream, looking at how it works and how you’re able to get it. We’ll also look at the television channels available on Stream, the apps available and the 10% Stream Credits subscription offer.

What is Virgin Media Stream?

In the UK, Stream is Virgin Media’s new streaming TV service. With Stream, you’ll get a small box that plugs in to the back of your existing TV, much like a Chromecast or an Apple TV. It transforms your existing television into a smart TV, giving you access to both live TV channels and on-demand streaming in one combined interface. You’ll also get a remote control with voice-activated navigation and search.

If you’re a Virgin Media broadband customer with M50 Fibre or above, you can get a Stream set-top box for a one-off fee of £35 (free when you choose M350 Fibre and above). Once you’ve got it, there are no monthly fees to use the Stream service if you’re only watching free-to-air channels and using free applications (BBC iPlayer, ITV Hub, YouTube, etc). For extra channels and content, you can add a Stream Subscription on a flexible 30-day rolling plan and with 10% back in Stream Credits.

If you’re not currently a Virgin Media customer, you’ll need to get Virgin Media broadband before you’re able to get a Stream box. We currently recommend Virgin's M100 broadband at £25 per month:

Alongside their Stream service, Virgin Media also continues to offer their traditional cable TV service on the Virgin TV 360 box.

With Virgin TV 360, you’ll get a lot more channels (up to 230 channels, depending on your subscription). You’ll also get a more powerful box that’s able to pause, rewind & record live television. The disadvantage is you’ll need to commit to a longer 18-month contract so you won’t get the same flexibility offered on Virgin Media Stream.

It’s currently possible to get Virgin TV 360 on the following broadband & TV bundles from £29.99/month:

Depending on the channels you require, it’ll often work out cheaper to get a Virgin TV 360 package.

For instance, customers on Virgin Media Stream will need to pay £76.25 per month for Essential Entertainment, Sky Sports, Sky Cinema and BT Sport. On top of that, you’ll need to add the cost of your broadband (available from £25 per month). That means your total bill will be more than £100 per month.

In contrast, you can get an a Virgin TV 360 package with all of these channels and more for £85 per month. This also includes the cost of your broadband and a Netflix Standard subscription (worth £10.99 per month).

On Virgin Media Stream, you’re currently able to get up to 108 channels, depending on the subscriptions you have. All of the channels will be delivered to you using your Virgin Media broadband connection.

You can watch the following 52 free-to-air channels with no monthly fee:

Meanwhile, there are an additional 56 paid-for channels available on Virgin Media Stream. You’ll be able to add them by taking out the relevant entertainment subscription as follows:

If you’re taking multiple packs, consider getting a broadband & TV bundle as this will often work out to be cheaper option overall.

Your Virgin Media Stream box will also allow you to use more than 20 apps including all of the following:

Some applications like Netflix, Prime Video, Disney+ and BritBox require you to have a subscription to the relevant service. Other apps like YouTube and BBC iPlayer can be used free of charge without the need for a subscription.

On Virgin Media Stream, you can pay for selected subscriptions through your Virgin Media bill. When you do this, you’ll receive 10% cashback in the form of ‘Stream credits’ which will be applied as a discount to your monthly bill.

You can pay for the following subscriptions on your Virgin Media bill and will get a 10% credit:

To give an example, if you subscribe to both Disney+ and Netflix through your Virgin Media bill, you’ll get a £1.50 credit every month (this is based on the combined subscription fee of £14.98 per month for the two services).

You can also access other streaming services like Prime Video and BritBox through apps on the box. However, you won’t be able to pay for them through your Virgin Media bill and you therefore won’t receive a 10% credit. 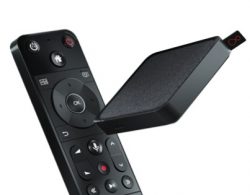 With Virgin Media Stream, you’ll get a small box that you can plug into your TV using a HDMI cable. The box connects to your Virgin Media broadband connection using Wi-Fi, delivering all of your live TV channels and on-demand entertainment. The box supports Ultra HD (4K) video at 60 frames per second and with HDR.