Giffgaff is launching a £10 Golden Goodybag with 9GB data, plus unlimited minutes & texts.

In the UK, giffgaff is about to launch the £10 golden goodybag with 50% more data than on their regular £10 goodybag.

Members on the golden goodybag will get 9GB of data for £10/month (increased to 10GB per month from your third month onwards). You’ll also get unlimited minutes & unlimited texts on the £10 golden goodybag, but you’ll need to ensuring the recurring goodybag setting is switched on in your account to qualify.

The £10 golden goodybag will launch to new and existing giffgaff members on the 28th July. You can order a free SIM card from giffgaff’s website to take advantage of the offer. It’s expected that the offer will remain available until at least the 31st October, with giffgaff then making a decision on whether to extend it.

In this article, we’ll review giffgaff’s golden goodybags, what you’ll get with it and how you can take advantage of goodybag. We’ll also look at the coverage available on giffgaff and how you can keep your current phone number when moving to the network.

What are Golden Goodybags?

To benefit from the golden goodybag plan, you’ll need to have an active giffgaff SIM card. If you don’t have one already, you can order a free SIM card online. You’ll then be able to buy the £10 golden goodybag from the 28th July onwards.

As part of this, you’ll need a credit card or debit card saved to your giffgaff account (it isn’t possible to buy a golden goodybag from a top-up voucher or Pay As You Go credit).

Despite the fact you’ll need to have the recurring goodybag feature switched on, you’ll still have complete flexibility with no need for a credit check. There’s also no obligation to keep the recurring goodybag setting switched on. If you cancel it, you’ll still benefit from the increased data allowance until the golden goodybag expires. However, you’ll then need to switch it on again if you’d like to buy a new golden goodybag.

As a giffgaff member, you’ll normally receive 1GB of extra data from your third goodybag purchase onwards. giffgaff has confirmed on their website that you’ll still get this on their new £10 golden goodybag.

As a result, your data allowance will be upgraded at no extra cost from 9GB to 10GB per month from your third goodybag purchase onwards.

At the moment, giffgaff has said that the golden goodybag is only launching on a trial basis. For the trial, it will initially be available from the 28th July to the 31st October 2020. It will then be reviewed with giffgaff making a decision on whether to extend it.

On giffgaff’s £10 golden goodybag bundle, you’ll have access to 99% population coverage on O2’s 2G, 3G and 4G networks. As giffgaff uses O2 as its network coverage provider, you’ll get access to the same coverage as customers on O2.

Before ordering a SIM card from giffgaff, we’d recommend double-checking the coverage in your area. You can do this by entering your postcode on giffgaff’s online coverage map:

For more information, see our guide to the coverage on O2.

With 5G coverage, it’s possible to access download speeds that around 5-10 times faster than 4G. You can also benefit from increased network capacity and lower amounts of latency.

Unfortunately, 5G coverage isn’t currently available to customers on giffgaff. It’s expected they’ll launch 5G before the end of 2020. However, it isn’t yet known whether a premium will be charged for 5G and whether you’ll be able to get it on the £10 golden goodybag.

When giffgaff eventually launches 5G coverage, it will be available in the same locations as the 5G coverage on O2:

For more information, see our guide to 5G mobile coverage in the UK.

Tethering or personal hotspot refers to the process of sharing your smartphone’s internet connection with another device (e.g. with your laptop or tablet). It’s often used as a convenient way of getting access to mobile broadband without the need to have a separate device and price plan.

On giffgaff’s £10 golden goodybag, you can use tethering and personal hotspot without any restrictions. This means you can share your 9GB (or 10GB) data allowance with other devices. For more information, see our in-depth guide to tethering on UK networks.

If you’re travelling abroad to another country, you can continue using your giffgaff SIM card through international roaming.

In 37 European destinations, you can use your golden goodybag allowances at no extra cost. This includes the allowance of unlimited minutes, unlimited texts and 9GB (or 10GB) of data.

If you’re travelling to any other country, you’ll need to pay giffgaff’s international roaming rates as detailed on this page. 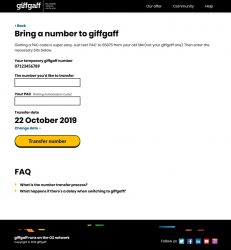 If you’re switching from another mobile network to take advantage of giffgaff’s £10 golden goodybag, you can take your current phone number with you.

Start by ordering your new SIM card from the giffgaff website. Once you’ve done that, ask your current mobile network to give you a PAC Code. You can get a PAC through your mobile network’s website or app, or by texting PAC to 65075.

After receiving your giffgaff SIM card and activating it on the £10 golden goodybag, you can then submit your PAC Code online through a form on giffgaff’s website. This will schedule the transfer of your phone number, normally for the next working day if you submit it before 3pm.

For a step-by-step guide on transferring your phone number to giffgaff, please select your current mobile network from the drop-down menu below:

For more information, see the terms and conditions of the golden goodybag on giffgaff’s website. If you don’t already have a giffgaff SIM card, you can order one online.