Three offers unlimited home broadband from £20/month with no need for a phone line. See how their broadband service (HomeFi) compares to rival ISPs. 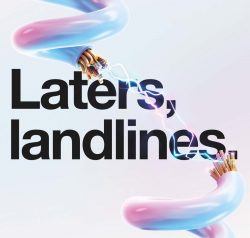 In the UK, 4G technology has now developed to the point where it can feasibly be used as an alternative to fixed-line home broadband. Three’s 4G-powered home broadband service bring this technology to the mass market, and is now available for just £20/month through this link (discounted to £10/month for the first six months).

As 4G home broadband doesn’t require a landline, it’s perfect if you’re looking for a fast and easy to setup home broadband connection. As it uses 4G technology, it also isn’t limited by the speeds you can get through a phone line or cable. Download speeds of up to 300Mbps are available on the service, and there’s also the flexibility to bring your broadband connection with you to another address at any time. 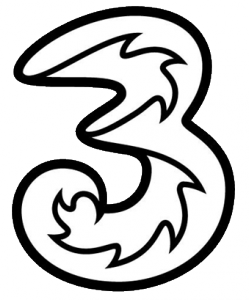 For customers wanting to replace their fixed-line home broadband connection, it’s currently possible to get unlimited data on Three Broadband for just £10/month for the first six months, followed by £20/month for the remainder of your plan (discounted from the normal price of £22/month). There’s no upfront cost when you take this on a 24-month contract.

When you take 4G broadband from Three, you’ll get a 4G Hub included in the price. This is sometimes also known as the Huawei HomeFi Plus or the Huawei B535. Prior to September 2019, customers were provided with the old Huawei HomeFi router (Huawei B311).

If you decide to replace your landline connection with Three’s 4G home broadband, it might be possible for you to stop paying a rental charge for your landline. This should save you in the region of £20 per month, potentially making it close to a cost-neutral solution.

As a special offer, Three is currently offering an exclusive £96 discount on their 4G home broadband service. This allows you to get unlimited data on the 4G Hub for just £10/month for the first 6 months. After that, you’ll pay £20/month for the rest of your plan (reduced from the normal cost of £22/month),

To benefit from the discount, you’ll need to order your home broadband service through this link. It isn’t necessary to use any voucher codes during checkout but you’ll need to complete the whole order process online.

For customers living in a 5G coverage area, it’s also possible to get Three’s 5G home broadband service. In theory, the 5G-powered service can offer up to gigabit download speeds (1,000Mbps) but Three says an average download speed of 100Mbps is much more realistic.

You can check on the Three Broadband website to see whether the 5G service is available where you live. You can also read our full review of Three’s 5G home broadband service. 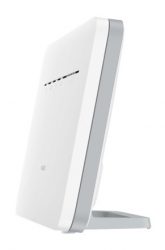 As of September 2019, Three is providing new 4G home broadband customers with an inclusive Huawei B535 4G LTE wireless router (often referred to as the Huawei HomeFi Plus router or the Three 4G Hub).

The upgraded HomeFi Plus router allows you to obtain Category 7 LTE download speeds on the Three network (up to 300Mbps download and up to 100Mbps upload). In practice, however, actual download speeds will be slower than this and will depend on where you live (something like 15-20Mbps is probably more realistic).

You can share your HomeFi broadband connection with up to 64 devices through dual-band Wi-Fi connectivity (with full support for 802.11ac wi-fi). There are also 4 Gigabit Ethernet sockets available for connecting wired devices to your network. Two SMA sockets are also available for attaching an external antenna if required.

For more information, please see the full HomeFi Plus specifications on Three’s website.

Prior to September 2019, Three provided their 4G home broadband customers with a Huawei B311 4G LTE wireless router. The Huawei B311 is no longer available to new customers, though many existing customers may still be using one.

The Huawei B311 allows you to share a wi-fi connection with up to 32 devices at one time using 802.11b/g/n technology. The router supports up to Category 4 LTE speeds (up to 150Mbps download and 50Mbps upload) but download speeds will typically be lower than this depending on your location. You can use the router’s built-in antenna, or you can connect the router to an external SMA antenna for better coverage and higher speeds.

The main downside of the Huawei B311 router is it only supports Category 4 LTE speeds (up to 150Mbps download and up to 50Mbps upload). In addition, the router only supports single-band Wi-Fi (802.11b/g/n technology at 2.4GHz). For this reason, we think the Huawei B535 HomeFi Plus router is a much better option and is well worth the upgrade for most people. 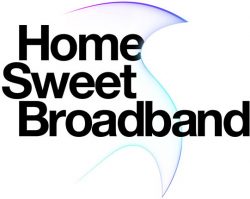 For faster download speeds and better performance, we’d always recommend choosing the newer Huawei B535 (HomeFi Plus) router. This is because it supports Category 7 LTE speeds (up to 300Mbps download and up to 100Mbps upload), which is double the maximum speeds you can get on the old HomeFi B311. You’ll also get dual-band Wi-Fi connectivity, including 802.11ac technology, on up to 64 devices at one time. The Huawei B535 also has three additional Gigabit Ethernet sockets for connecting wired devices to your network.

If you’re looking for a 4G router that also incorporates the Amazon Alexa voice assistant, Three also offers the Huawei AI Cube B900 router (also known as the 4G Hub with Alexa). This supports Category 6 LTE speeds (up to 300Mbps) on up to 64 devices at one time. There’s also a single Ethernet socket for connecting a wired device to your network. Unfortunately, the AI Cube lacks a SMA socket so you can’t connect an external antenna to improve the coverage on it.

The following table shows a side-by-side comparison of the new HomeFi Plus, the AI Cube and the original HomeFi router:

For most people, we’d recommend choosing the normal 4G Hub or HomeFi Plus router (Huawei B535) instead of the two-in-one 4G Hub with Alexa (AI Cube B900) device. Although the AI Cube gives you an additional Amazon Alexa smart speaker, you’ll lose out with poorer connectivity options (including slower 4G uploads, only a single Gigabit Ethernet socket and the lack of an external SMA antenna connector). With the money you’d save choosing a Huawei B535, you can easily buy a standalone Amazon Echo speaker that works with your Huawei B535.

The absolute maximum download speed supported is 300Mbps on Three’s 4G home broadband. With the 5G Hub, it’s theoretically possible to get up to gigabit download speeds when connected to a 5G network.

Whilst the maximum download speeds sound fairly impressive, actual real-world download speeds will normally be much slower than this. For instance, it depends on the strength of the network signal you receive and whether it’s a 3G, 4G or 5G connection. Some people might live in a coverage blackspot whereas others may live in an area with really strong coverage.

It’s best to use Three’s online coverage checker to see whether a signal is available where you live.

The position of the router in your home can often make a big difference to the download speeds you get. Normally it’s best to have your router on an upstairs windowsill, ideally facing in the direction of your nearest mast from Three. Having an external antenna can also help by giving you a stronger 4G signal. External factors like the weather or congestion on your local mast can also affect the download speeds you receive on the service.

Latency is the amount of time it takes for your device to send data to the internet and for a response to be received. It’s also known as “lag” or “ping” if you’re familiar with online gaming.

For things like browsing the internet or watching TV shows, the extra wait of around 0.03 seconds will barely be noticeable. However, it could affect some fast-paced online multiplayer games like Call of Duty, Halo, or Counter-Strike on your Xbox, PlayStation or PC.

The key advantages of 4G broadband compared to traditional fixed broadband are:

There are also some key disadvantages of 4G broadband:

You can also get a 4G-powered home broadband service from BT, EE or Vodafone. 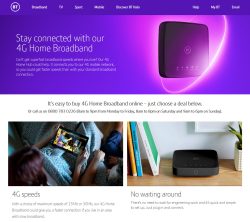 On BT’s 4G home broadband, you can get unlimited data from £45/month. Not only is this a lot more expensive than Three Broadband, it’s also capped in terms of the speeds you’re able to get. You can choose from two different plans, which are limited to a maximum download speed of either 15Mbps or 30Mbps:

On EE’s 4GEE Home, a range of broadband data plans are available from £35/month. The entry-level plan comes with just 50GB of data per month, increasing up to 500GB per month on the most expensive plan:

If you’re looking for a faster 5G home broadband solution, you can choose from Three’s 5G home broadband, Vodafone’s GigaCube 5G and EE’s 5GEE Home. All three services come with a Huawei 5G CPE Pro router, with a range of different data plans and allowances available:

For more information, see our full guide to 4G & 5G home broadband services in the UK.

Unlike most other internet service providers, Three’s home broadband service doesn’t rely on a BT Openreach phone line or a Virgin Media cable connection. For this reason, the coverage profile for Three Broadband is very different from other ISPs. You might still be able to get Three Broadband even if you’re unable to get fibre broadband from any other provider. 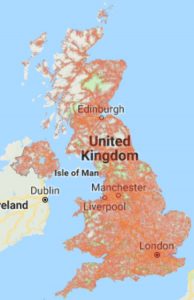 Three Broadband currently offers 99.8% population coverage across the UK. This includes 99.8% coverage on 4G, as well as 98.7% coverage on 3G.

Before joining Three Broadband as a new customer, it’s strongly recommended that you check the coverage in your area. You can do this by entering your postcode on Three’s online coverage map.

For more information, please read our full review of the coverage on Three.

Three’s 5G home broadband service is available in selected postcodes in over 150 towns and cities across the UK. The best way to check whether 5G broadband is available where you live is through this page on Three’s website.

Once you’ve entered your postcode and address, you’ll be told about the plans that are available where you live. You’ll be offered a 4G broadband plan if 5G coverage isn’t yet available in your area. 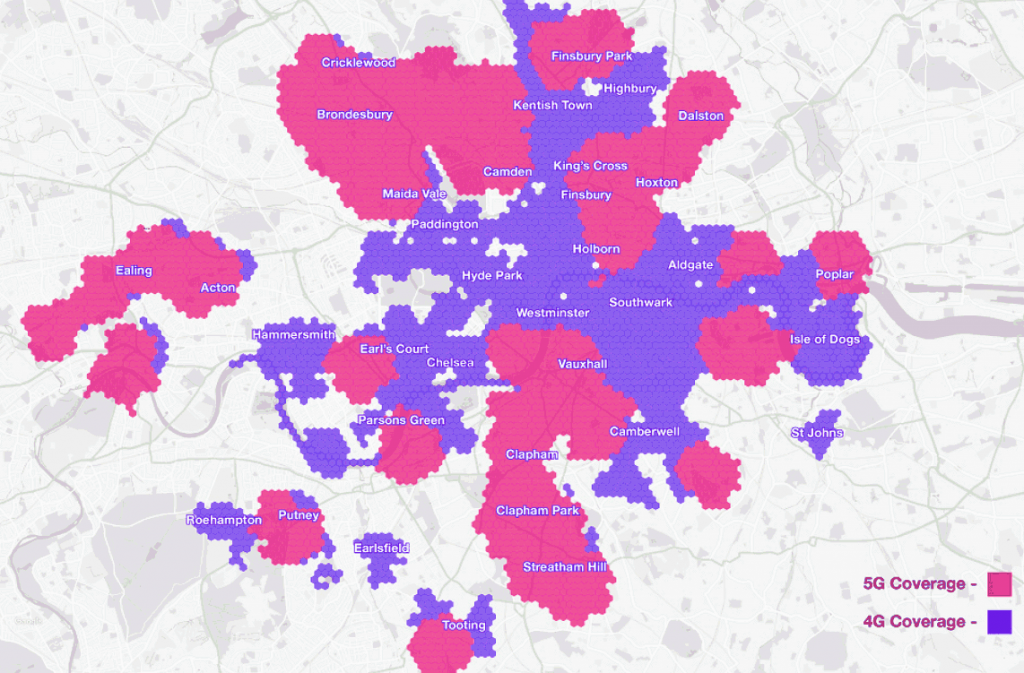 There’s more information about the 5G roll-out on Three’s website. Alternatively, see our in-depth guide to the coverage on Three.

On Three’s 4G home broadband service, it’s possible to use your data abroad in 71 destinations at no extra charge. This is available as part of Three’s Go Roam offer.

If you’re travelling within Europe, it’s possible to use up to 20GB of data abroad each month. If you exceed this limit, a regulated surcharge will apply (currently 0.3p/MB).

If you’re travelling to a Go Roam country outside of Europe, it’s possible to use up to 12GB of data abroad each month. If you go over the 12GB limit, international roaming will be disabled for the rest of the month.

Your Comments 293 so far

We'd love to hear your thoughts and any questions you may have. So far, we've received 293 comments from readers. You can add your own comment here.