30GB Data For £10 on Vodafone Basics: With Unlimited Minutes & Texts 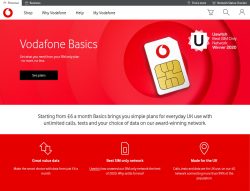 In the UK, Vodafone is now offering a SIM-only plan with a massive 30GB of data for £10 per month. The SIM card includes unlimited UK minutes and unlimited UK texts and is available on a 12-month contract.

In this article, we’ll look at Vodafone’s new 30GB for £10 Basics deal. We’ll look at what you’re able to do with the 30GB data allowance and the key benefits of the plan including the download speeds and coverage available. We’ll also look at how you can keep your current phone number with the deal.

In the UK, Vodafone has launched their best ever SIM-only deal at the £10 per month price point. On their new £10 Vodafone Basics plan, you’ll now get a massive 30GB of data, along with unlimited minutes and texts:

The 30GB for £10 deal is a Vodafone Basics plan. According to Vodafone, it’s a “simple plan for everyday UK use”. It gives you access to Vodafone’s fastest available 4G speeds, but it doesn’t give you access to 5G or to features like international roaming and premium-rate calling.

On Vodafone Basics, you’ll get unlimited UK minutes and unlimited UK texts included in your plan. This allows you to call and text UK landline and mobile numbers (that’s most phone numbers beginning with 01, 02, 03 and 07). You’ll also be able to call 08 numbers at the standard rate.

Being a simpler price plan, it won’t be possible to make international phone calls or premium-rate phone calls on a Vodafone Basics plan. Premium rate messages and MMS picture messages are also not available. If you want these additional features, you’ll need to choose a Vodafone Red or a Vodafone Unlimited SIM card instead.

Vodafone offers their fastest available 4G speeds on Vodafone Basics. You’ll normally be able to expect an average download speed of around 23-35Mbps. This can, however, vary based on location.

You can get a personalised estimated of the speeds available in your area by entering your postcode on Vodafone’s coverage map and tapping the “Data speed info” button.

On the 30GB for £10 Basics plan, you’ll have access to Vodafone’s 2G, 3G and 4G networks. This gives you more than 99% population coverage across the UK.

Before you sign up for the Vodafone Basics plan, it’s worth double-checking to make sure there’s coverage in your area. You can do this by entering your postcode on Vodafone’s online coverage map:

International roaming is not available on Vodafone Basics. You will, however, still be able to make emergency phone calls when abroad. For access to Vodafone Global Roaming, you’ll need to choose a Vodafone Red or Vodafone Unlimited plan.

As a Vodafone Basics customer, you’ll get access to VeryMe Rewards. This is Vodafone’s customer loyalty programme.

With VeryMe Rewards, you’ll get access to weekly giveaways and offers such as discounted cinema tickets and 2-for-1 meals at local restaurants. You’ll also get a range of occasional freebies with it.

If you’re switching from another mobile network to Vodafone, it’s easy keeping your current phone number.

Start by ordering your new 30GB for £10 Basics plan online. Once you’ve done that, you can request a PAC Code from your old network. This is available through your mobile network’s website or app, or by texting PAC to 65075.

When your new Basics SIM card arrives in the post, place it inside your phone and then give the PAC Code to Vodafone. The transfer of your phone number will then be scheduled, normally for the next working day.

For a step-by-step guide on how to transfer your phone number to Vodafone, please select your current mobile network from the drop-down menu below: