Vodafone is currently offering 8GB of data for £8/month when you use a special discount code on the £8 Vodafone Basics Plan.

In the UK, Vodafone is currently offering 8GB of data for £8/month when you use a special voucher code on the £8 Basics plan.

Using the MOREDATA voucher code when ordering a plan through this link, you’ll get an extra 3GB of data every month on the £8 Basics plan. This will further increase your monthly data allowance from 5GB to 8GB for just £8/month.

In this article, we’ll discuss Vodafone’s March 2020 voucher code offer, what you’ll get on Vodafone Basics and what you can do with the 8GB data allowance. We’ll also discuss some of the features and benefits of Vodafone before looking at how you’re able to keep your current phone number. 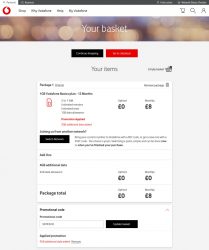 Vodafone is currently offering an extra 3GB of data per month for customers who sign up to their £8 Vodafone Basics tariff. Instead of getting the regular 5GB data allowance, you’ll get a massive 8GB of data for £8/month when you use the MOREDATA voucher code.

The voucher code should be entered during the checkout process in the box that’s provided after choosing your plan. The box is labelled as “promotional code”.

Unfortunately, the MOREDATA voucher code isn’t valid on either of these plans but the monthly data allowance has already been boosted up from the normal monthly amount (originally 500MB on the £6 plan and 3GB on the £10 plan).

It’s worth noting that Vodafone Basics is a UK-only plan, available as an online-only exclusive to customers who are new to Vodafone. As a plan that comes with “no fuss, no frills, and none of those extra features that just cost you more”, usage of some paid-for services are barred on the plan. This means you won’t be able to make international calls or premium-rate phone calls to phone numbers beginning with 09. You also won’t be able to send MMS picture messages.

In the UK, the average smartphone user consumes around 3GB of data per month. The increased 8GB data allowance provided on Vodafone’s £8 Basics plan should therefore be more than enough for the majority of users.

As a rough guide, 8GB of data per month will allow you to use the following:

For more information, see our full guide to mobile download allowances. You can also see the assumptions we’ve made in coming to these numbers.

You can check the coverage in your area by entering your postcode on Vodafone’s online coverage map:

Unfortunately, 5G coverage, Wi-Fi Calling and 4G Calling are not available on Vodafone Basics price plans. You should choose either a Vodafone Red or Vodafone Unlimited plan if you want access to these features.

For a more accurate data speed prediction that’s specific to your area, enter your postcode on Vodafone’s online coverage map. You can then tap the “Data speed info” button for an expected range of download speeds and upload speeds on 2G, 3G and 4G in your area.

For more information, see our guide to mobile download speeds.

Customers signing up for a Vodafone Basics price plan will have access to Vodafone’s customer rewards programme which is known as VeryMe Rewards.

VeryMe Rewards gives you access to weekly discounts, offers and giveaways from brands such as Asos, Vue, Greggs and Costa Coffee. 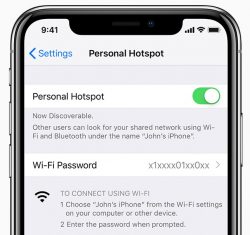 Tethering or personal hotspot refers to the process of sharing your smartphone’s internet connection with other devices (e.g. with your laptop or tablet).

On Vodafone Basics, you can tether and share your increased 8GB data allowance with other devices. This allows you to use the internet whilst you’re on-the-go from other devices (e.g. for watching a video on your tablet or for working on your laptop where a wi-fi connection isn’t available).

You can tether up to your entire monthly data allowance with Vodafone Basics. 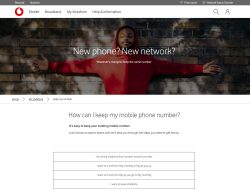 If you’re changing from another mobile network to Vodafone, it’s a straightforward process to keep your current phone number.

You can then order your Vodafone Basics SIM card through this link, remembering to use the MOREDATA voucher code to get your larger allowance of data.

Once your new SIM card is active, place it inside your mobile phone and then fill out Vodafone’s number transfer form online. They’ll schedule the transfer of your phone number, normally for the next working day, after you do this.