Sky Glass is the new smart TV from Sky in the UK, allowing you to stream all of your channels and shows over WiFi. It has everything built-in so there’s no need for a separate box or satellite dish. You’ll also get a 4K Quantum Dot display, access to cloud-based recordings, and built-in Dolby Atmos surround sound.

The built-in sound system is one of Sky Glass’ key selling points, especially when compared to other TVs at this price range. On most other comparable smart TVs, you’ll only get stereo speakers with a total sound output of around 20W. In contrast, Sky Glass has six built-in speakers, giving you up to 215W of room-filling Dolby Atmos surround sound. 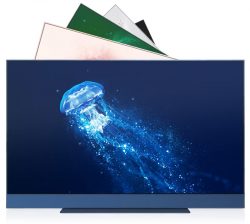 In the UK, Sky Glass is the new smart TV from Sky. Available from £13 per month (plus the cost of your Sky TV subscription), it’s designed to have everything you need built-in. This means there’s no need for a separate box, dish or television aerial. You just need the one wire to deliver power to your TV, along with a Wi-Fi connection to receive all your channels and apps.

This all-in-one concept extends to the sound system on Sky Glass, which easily stands apart from other TVs offered at the same price range. On most other smart TVs, you’ll get basic stereo speakers, giving you up to 20W of sound output in total. If you want to improve the quality of the sound, you’ll need to buy a separate audio system (which means more wires, more space, more power supplies, etc).

On Sky Glass, you’ll get six built-in speakers, giving you up to 215W of sound output in total. This is available without the need for any extra wires or connections as everything is built in directly to the TV. For instance, there are three front-facing speakers and a subwoofer below the screen, hidden behind a woven acoustic mesh. By default, this is colour-matched to the set you buy. However, if preferred, you can customise the colour to personalise your set and to give it a little more contrast. There are also two upwards-firing speakers, which are embedded within the top edge of the screen.

Sky is so proud of the built-in audio system on Sky Glass that they’ve recently teamed up with the English National Opera (ENO) to create the world’s first TV orchestra with Sky Glass.

The six built-in speakers on Sky Glass work together to give you room-filling 360° Dolby Atmos surround sound. The idea behind Dolby Atmos technology is it creates a 3D sound field in your living room. This puts you right in the middle of the action, whether you’re watching the latest blockbuster movie or sports match.

You can benefit from Dolby Atmos surround sound when watching compatible content on Sky Glass. For your Sky TV channels, you can add the £5/month “Ultra HDR and Dolby Atmos” add-on (this applies to the Sky Entertainment, Sky Cinema and Sky Sports channels). You can also use it when watching compatible content on apps such as Netflix and Prime Video.

If you’d like to attach a separate sound system to your TV, this is also possible on Sky Glass. You can do this through the HDMI port which is eARC-enabled. 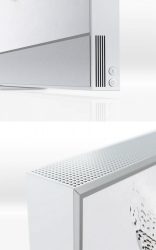 Normally, it shouldn’t be necessary to change the sound settings on your Sky Glass as there’s a built-in Auto-Enhance feature that does it for you automatically. This feature detects what you’re watching and optimises the picture and sound settings for you.

If you’d like to customise the settings by yourself, you can choose from the following seven modes in the menu:

There’s also a handy ‘Night mode’ feature for when you’re watching TV late at night. It minimises disruption to others in your household by reducing the overall volume of your TV. At the same time, it boosts the dialogue so you can still hear what’s being said. It also dampens any extreme or sudden sounds (such as engines, sirens, gunshots, etc) to minimise the chance of them waking anyone up.

Alongside the six powerful speakers, Sky Glass has two built-in far-field microphones. Together, they allow you to control the TV with your voice.

Whenever you are in the room, you can just say “Hello Sky” and tell the TV what you’d like to do. For instance, you can say the name of the show you’d like to watch. Alternatively, you can ask it to pause or rewind the show you’re watching, or to open up an app such as Netflix.

Because of its powerful speakers and its prime position in your living room, Sky Glass is also a great device for listening to music, radio, podcasts and more.

You can use some of the built-in apps for listening to music and radio on your TV, including BBC Sounds, Global Player, RadioPlayer, Spotify, Vevo and YouTube. 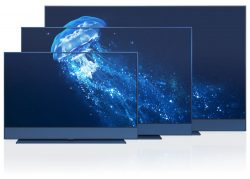 Alongside the powerful sound system, you’ll also find all of the following features on Sky Glass: 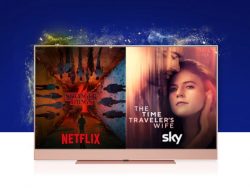 At present, you can get Sky Glass from just £13 per month (payable over 48 months). The price you pay depends on the screen size you require:

On top of that, you’ll pay £26 per month for your Sky Ultimate TV subscription. This gives you access to more than 100 channels including all of the Sky Entertainment channels like Sky Atlantic. You’ll also get a Netflix subscription included within the price.