Blockbusters are back on Sky Cinema this autumn, including Sonic the Hedgehog 2, The Lost City and The Batman. You’ll also get Paramount+ included at no extra cost. 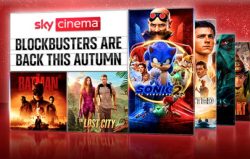 This autumn, there’s an unrivalled range of the latest blockbusters being screened on Sky Cinema, including Sonic the Hedgehog 2, The Lost City and The Batman.

You’ll also get more than 1,000 movies to stream on-demand in HD, along with exclusive access to Sky Original films and a 20% discount on the Sky Store. Paramount+ is also included at no extra cost with Sky Cinema (worth £6.99 per month from Paramount).

In this article, we’ll look at the latest Sky Cinema blockbusters, along with the other features you’ll get included such as the Paramount+ subscription. We’ll also look at the best Sky Cinema deals, starting from £12 per month on an 18-month contract for existing Sky TV customers.

This autumn, Sky will be showing an ‘unrivalled range of the latest blockbusters’ on Sky Cinema, including all of the following films:

Alongside the blockbusters this autumn, you’ll get access to more than 1,000 movies to stream on-demand in HD with your Sky Cinema subscription. There are also 11 Sky Cinema channels, spanning a range of genres like action, animation, comedy and more.

Your Sky Cinema subscription also gives you exclusive access to Sky Original films including The Accursed, Paws of Fury: The Legend of Hank, The God Neighbour and Sundown.

There’s also a 20% discount on all rentals from the Sky Store when you have Sky Cinema.

As a Sky Cinema customer, you’ll get Paramount+ included at no extra cost. This gives you access to a ‘mountain of entertainment’ and saves you £6.99 per month on the normal price for Paramount+.

Some of the shows available on Paramount+ include Yellowstone, American Gigolo, Halo, 1883, Star Trek: Strange New Worlds and The First Lady. You’ll also find a range of movies including Scream 5, Mission Impossible: Fallout and Transformers.

As a Sky Cinema customer, you’ll be able to watch Paramount+ through your Sky Q box or Sky Glass TV. You can also stream it on other devices through the Paramount+ app or website. 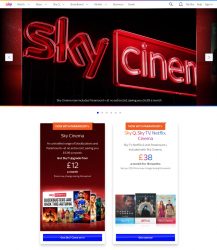 If you’re an existing Sky TV customer, you can add Sky Cinema for just £12 per month on an 18-month contract.

Meanwhile, if you’re new to Sky, you can choose one of the following deals:

You can also build your own custom plan incorporating other services like Sky Broadband.