In the UK, Shell offers a range of home broadband plans, starting from £21.99/month on an 18-month contract. Offered through Shell Energy, the UK-based utilities arm of Shell, the broadband plans come with unlimited downloads plus a 3% saving on fuel when you fill up your car at Shell petrol stations.

In this article, we’ll review Shell Energy Broadband. We’ll start by looking at the price plans they offer, what’s included and what you’ll need to pay extra for. We’ll then compare the download speeds available on each plan, before looking at Shell’s broadband router and the discount on filling up your car. Finally, we’ll discuss coverage and availability of the service. 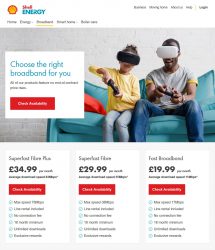 Shell’s entry-level home broadband service is known as Fast Broadband. Making use of ADSL technology, the service is delivered through your BT Openreach phone line.

On Fast Broadband, Shell currently advertises an average download speed of 11Mbit/s along with an average upload speed of 1Mbit/s. In reality, speeds will vary for each customer based on the distance from your home to your nearest telephone exchange. Download speeds could be as high as 17Mbit/s if you’re living close to your exchange, or it could be as low as 1 or 2Mbit/s if you’re living a long way from your exchange. A personalised speed estimate is available from Shell’s website.

There’s an 18-month contract when you sign up for Shell’s Fast Broadband service. The cost of your line rental is also included in the price.

Both Superfast Fibre Broadband plans require you to sign up for an 18-month contract.

As part of taking Shell Energy Broadband, you’ll also need to take your landline rental from Shell. The line rental charge is already included in the cost of your home broadband plan, but phone calls aren’t included within the base package.

If you regularly make phone calls from your landline, you can add one of Shell’s two inclusive calling plans:

Your inclusive phone calls can last for a maximum of one hour, after which you’ll be charged the standard 13p/minute rate. You can avoid this by hanging up and re-dialling after one hour.

If you don’t add a calling plan to your package, phone calls will be charged on a Pay As You Go basis at 13p/minute. There’s also a 20p connection charge for each call you make (this only applies to phone calls that are not covered by a plan).

The average and maximum download speeds on Shell Energy home broadband are as follows:

The average speeds advertised by Shell are based on what at least 50% of customers are able to get during peak usage hours (8pm to 10pm). Meanwhile, the maximum download speed and maximum upload speed is based on a theoretical maximum for what is possible with the technology.

Because the speeds you’re able to get depend very much on your location, it’s best to get a personalised speed estimate before deciding on a plan. You can do this by entering your address on the Shell Energy Broadband website: 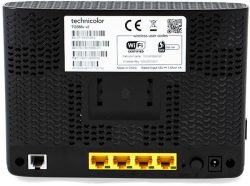 Customers signing up for Shell Energy Broadband will be sent a Technicolor TG588V V2 router. The router attaches to your landline socket and shares your broadband internet connection with other devices using wi-fi or Ethernet.

The Technicolor router supplied by Shell Energy Broadband is fairly basic, especially when compared to what other providers are now offering. The router only supports single-band wi-fi (802.11n at 2.4GHz), so it isn’t possible to use dual-band wi-fi on your devices (5GHz Wi-Fi). In addition, whilst there are 4 Ethernet sockets for connecting wired devices to your network, these are only Fast Ethernet sockets with a maximum speed of 100Mbit/s. This is slower than the more modern Gigabit Ethernet sockets you’ll find on many other routers. 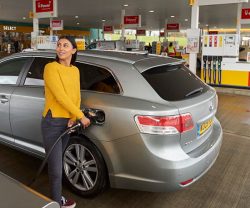 Once your Shell Energy Broadband service has started, you’ll be eligible for a discount when filling up your car at Shell. The discount is currently 3% on fuel from Shell including V Power, main grade petrol, main grade diesel and LPG. The 3% discount is available on up to 60 litres of fuel each month.

Assuming you were to make full use of the discount each month, this could equate to a saving of around £2.30 on filling up your car each month (based on an average price of 127.7p for a litre of unleaded petrol). Of course, this assumes you’d be filling up your car anyway at Shell. In reality, however, you should continue comparing prices with other petrol stations to ensure you’re getting the best value fuel, regardless of the discount.

To get your 3% discount, you’ll need to enrol in the Shell Go+ app. In addition to the 3% saving you’ll get on fuel, there may also be other personalised offers and discounts available through the app.

In our opinion, the 3% discount on fuel is a nice bonus if you’re someone who fills up their car occasionally at Shell. However, even if you were to make full use of the discount, the potential savings would only be around £2.30 per month. Therefore, this offer might not be strong enough to convince you to always fill up your car at Shell rather than other places.

Nowadays, almost all UK homes should be able to get Shell’s Fast Broadband service (ADSL), though speeds can vary substantially depending on the distance from your home to the nearest telephone exchange.

The Superfast Fibre Broadband service (FTTC) is available in around 91% of UK homes. To sign up, your local Openreach street cabinet will need to have been connected to fibre. There also needs to be available capacity for a new connection at that cabinet (otherwise, a waiting list might apply if all of the available capacity has been used up).

You can check whether Shell Energy Broadband is available where you live by entering your postcode on their website.

Customers who originally signed up for First Utility Broadband will continue to have their service supplied by Shell Energy Broadband.