What is infrared radiation? 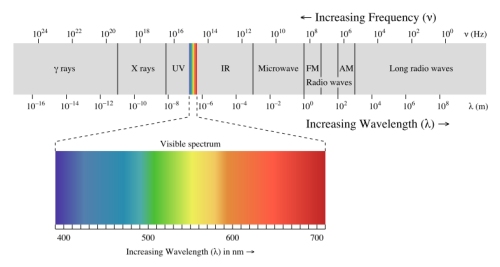 What is the difference between visible light and infrared?

Visible light and infrared are both forms of electromagnetic radiation but with different wavelengths. Visible light has a wavelength of between 400nm and 700nm (a nanometer is so small that we can fit 1,000,000,000 in just 1 meter). We can only “see” the EM radiation in this range. At 700nm and longer, we enter the realm of infrared radiation.

Most cameras are designed to capture an image of what people can see. Hence a good camera would only detect EM radiation in the visible light spectrum (between 400nm and 700nm).

Yet the charged couple devices used within cameras are typically manufactured to pick up EM radiation between 300nm and 1100nm. This means they are capable of detecting infrared light too (between 700nm and 1100nm is infrared).

To improve image quality, camera manufacturers typically add films and filters to block out infrared light and ensure only visible light reaches the CCD. If the infrared radiation was recorded by the camera and appeared in our photos, the photos would not be an accurate representation of what we can see – i.e. what we want to photograph!

Mobile phone cameras tend to be produced a lot cheaper than proper digital cameras and hence the vast majority of mobile phone cameras have a much thinner film/filter to block out infrared light. The lack of infrared filter is one reason photographs taken on mobile phones don’t look as good as those taken on proper digital cameras but it also provides us with an opportunity to use our mobiles to “see” in infrared.

How can I harness this fact?

Simply point your mobile phone camera towards a infrared light source and you can begin to see this new invisible infrared world!

For example, stick your phone camera in front of a television remote control and start pressing some buttons: you’ll see a few flashes of light (your remote uses invisible IR radiation to communicate with your TV – you wouldn’t normally be able to see this radiation as our eyes are not sensitive to the infrared wavelengths used by the remote). If you’ve got a Nintendo Wii, point your phone camera at the sensor bar. You’ll notice the sensor bar emits invisible IR radiation (this is how the Wiimotes track your movement).

Unfortunately, you won’t see the world in true infrared. Your mobile phone camera is sensitive to visible light too – and fortunately (although unfortunately in our case) this always registers much brighter on the CCD and drowns out the infrared image. If you’re really serious about seeing the world in infrared, you can pick up an infrared filter from Amazon. These filters will block out visible light and hence allow you to get a better image of the invisible infrared world.

Your Comments 53 so far

We'd love to hear your thoughts and any questions you may have. So far, we've received 53 comments from readers. You can add your own comment here.