Two of the most impressive Android applications, “Goggles” and “Translate”, promise to allow you to read, write, understand and speak another language.

Since I switched over to the HTC Desire a few months ago, I’ve been avidly scouring the Android market for the latest and coolest applications. Two applications which really stood out for me were “Goggles” and “Translate” – both from Google. Combined the two applications are incredibly powerful – they give you the potential to read, write, speak and understand in another language even if you don’t know a single word of it. The applications can translate signs, voice and text between your native language and another language. In fact, you could think of the two apps as a very primitive version of the universal translator in Star Trek – a fictional device which would abolish language barriers by transparently translating between languages and allowing everyone can understand each another without having to learn a new language.

The first of the two applications is Google Goggles. Goggles is Google’s visual search application – the application allows you to take a photo of something (such as a landmark, business card or barcode) and searches for related contextual information. Recently, Googles integrated optical character recognition and translation into Goggles. This means it is possible to take a photograph of text in another language and to have Goggles translate it into your native language.

Step 1: Take a photograph of some text in a different language. 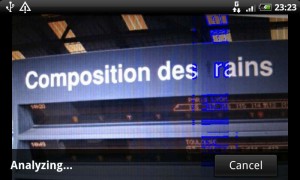 In this example, I’ve used a sign from a railway station in France. (Unfortunately it was prohibitively expensive to travel to France for the purposes of this articles so instead I’ve taken a photo of a photo taken in France!)

Step 2: Google Goggles will apply OCR and detect the text within the image 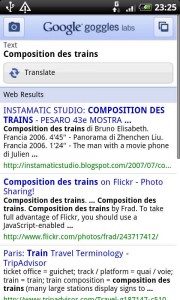 Here we can see that Goggles has extracted the text “Composition des trains” from the photograph I took. It is showing me the search results for that phrase and also giving me a one-click button to translate the text into English. 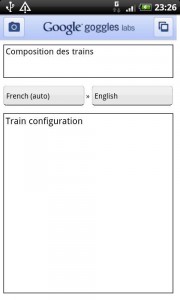 A click on the “Translate” button shows me the meaning of the sign in English. I also have the option of correcting the input text here if the OCR system made some mistakes.

Google Translate is the second application which we need. Originally designed as an Android interface to Google’s translation website, the application now integrates voice input (providing you have the necessary libraries on your phone) and a text-to-speech engine (Stephen Hawking style). It really does allow you to say something in your native language, and the phone will translate it and speak it back to you in another language.

Step 1: Say something in English 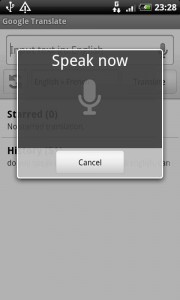 If you’ve got the necessary libraries installed, there is a microphone icon in Google Translate. Press this and then say something in English. I asked “Do you speak English?”.

Step 2: Translate applies voice recognition to what has been said and then translates it 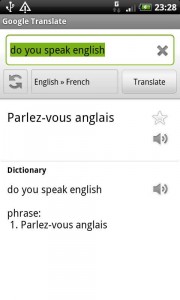 Here we can see that Translate has recognised what I said in English and has translated it into French. By pressing on the speaker icon, the phone will now read the French translation out loud.

Why is this so exciting?

The other reason why this specific implementation is exciting is because it is mobile-based. Unlike desktop PCs or laptops, we really do carry our phones everywhere and keep them on 24/7. A PC based translator is never going to be useful in our everyday lives as PCs are confined to a desk – whereas a mobile-based application can integrate into our lives much more seamlessly.

What are the drawbacks with Goggles/Translate?

Obviously, this is still no real substitute to learning a language the old fashioned way. There are several key reasons:

That said, Goggles and Translate are still fantastic toys and are still incredibly useful. The applications are both very impressive and I look forward to revisiting this review in 5 years time – with another 5 years of progress in OCR, voice recognition, translation & text-to-speech technology, I would not be too surprised if a “Universal Translator” begins to look more like science fact than science fiction.

Google Goggles and Google Translate are Android applications and are available from Android Market. Android runs on a variety of phones but I personally recommend the HTC Desire which is available from all 6 of the UK’s major networks.