Samsung’s Galaxy S20 is a powerful 5G phone with the latest camera technology and a super-sharp Quad-HD+ display.

If you’re looking for a high-end 5G-ready smartphone, one of your primary contenders at the moment should be Samsung’s Galaxy S20 series.

The Galaxy S20 devices have cutting-edge cameras that allow you to take professional-looking photos at a resolution of up to 108 megapixels. You’ll also get a super-sharp Quad HD+ screen using Samsung’s trademark AMOLED technology for a rich and vibrant viewing experience. Samsung’s smartphones also lead the market with their support for 5G, with over half of all 5G smartphones last year being made by Samsung.

Until the 30th July 2020, Vodafone is offering a £288 discount on the Samsung Galaxy S20+ when you take it on their Unlimited Max price plan. You’ll get access to 5G coverage with the fastest available download speeds on Vodafone’s network. You’ll also get a free pair of the Samsung Galaxy Buds+ earphones included, which is worth an additional £159 of value (giving a total saving of £447). The plan also includes access to VeryMe Rewards and Vodafone’s Global Roaming Plus (with inclusive roaming in 81 destinations).

The following table shows some of the key differences between the three phones:

* The prices shown for comparison are a 24-month contract with unlimited data on Vodafone’s Unlimited Max price plan. 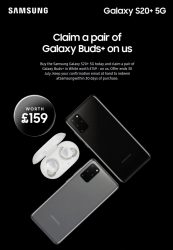 If you’re looking to get a Galaxy S20 smartphone on Vodafone, it’s worth taking advantage of the offer that’s currently available on the Galaxy S20+.

Vodafone is currently offering a £12/month discount on this device, meaning you can get it for just £62/month plus £29 upfront (saving you £288 over the course of your contract). It’s available at a lower price than the regular Galaxy S20, making it a no-brainer to choose the S20+ over the regular S20.

In addition, you’ll also get a free pair of Galaxy Buds+ earphones (worth £159) as long as you order your device before the 30th July.

Through the rest of this article, we’ll take a more in-depth look at the features of the Galaxy S20 phones including the camera, display, network connectivity, design and software. We’ll also look at the technical specifications of each device.

For many people, the camera on their mobile phone is now the primary way of capturing and recording special memories for the future. It’s an area where we see continued innovation, and it’s one of the key features that now really sets smartphones apart from each other.

On the Samsung Galaxy S20, you’ll get three rear-facing cameras with optical image stabilisation (OIS) built-in to the system. There’s a 12-megapixel ultra-wide camera with a 123° field of view, a 12-megapixel wide-angle camera and a 64-megapixel telephoto camera. For improved low-light photography, the main camera has 1.8µm pixels (this compares to 1.4µm on other handsets like the iPhone 11). It means more light is able to reach the sensor for each individual pixel, giving clearer and brighter photos in low-light conditions. Meanwhile, the high-resolution telephoto sensor allows you to take highly detailed close-ups with 3x “hybrid optical” zoom and 30x “super resolution” zoom. 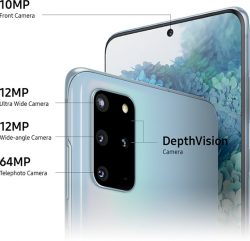 If you choose the Galaxy S20+ instead of the Galaxy S20, you’ll get an additional time-of-flight sensor (making a total of four rear-facing cameras). Known as the DepthVision camera, the additional sensor measures the distance to different objects in your image. It enables better portrait photography, with the “bokeh” depth-of-field effect which is often seen on photos from a professional SLR camera.

The Galaxy S20 Ultra has a further upgrade, with the wide-angle camera increasing up to 108 megapixels. This gives you the ability to go up to 10x hybrid optical zoom and 100x super resolution zoom. In most cases, however, you’ll probably still use it as a regular 12 megapixel camera to save on storage space. If you do this, Samsung’s nona-binning technology combines 9 pixels into 1, giving you a clearer 12 megapixel photo (with each combined pixel having an area of 2.4µm). 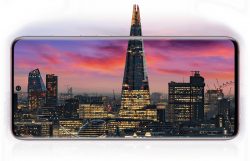 Since the first Galaxy S smartphone was released in 2010, Samsung has consistently pushed the limits on their mobile phone displays. The company was a pioneer of using organic LED (AMOLED) displays on a smartphone. AMOLED offers a richer and more vibrant viewing experience than regular LCD displays used on many other phones. They were also pioneers of curved display technology which was introduced in 2015 on the Galaxy S6.

This year, the Galaxy S20 phones have Samsung’s most advanced and technologically impressive displays to date.

On all three phones, you’ll have a Quad HD+ screen giving you a resolution of up to 3200×1440 pixels. This gives you a super-sharp viewing experience, with a pixel densities between 511 and 563 pixels per inch. There’s also the ability to use a 120Hz refresh rate for smoother scrolling and higher refresh rates when you’re using apps or playing games on your phone (available when using Full HD+ resolution).

As before, the displays are still using organic LED, but they’ve been upgraded to use Samsung’s latest Dynamic AMOLED technology. According to Samsung, the screen has a contrast ratio of 2,000,000:1 with a peak brightness level of 1200 nits. This should ensure clear viewing outdoors, even in direct sunlight. The screen also has HDR10+ certification which gives you cinema-grade colour and contrast when viewing HDR content. A blue light reduction feature is also built in to reduce eye strain and fatigue.

All three Galaxy S20 phones use Samsung’s Infinity-O display. What this means is the space on the front of your handset has been engineered to maximise the screen space and to minimize the bezels. You get something that’s pretty close to an edge-to-edge display, with a gentle curve on both edges of the phone for a smooth and sleek look. To enable the Infinity-O layout, Samsung has placed a small cut-out at the top of the screen for the front camera of the phone. The screen also has a built-in ultrasonic fingerprint sensor allowing you to unlock your device quickly and securely.

For more information, DisplayMate has carried out an in-depth test of the display on the Galaxy S20.

In the UK, the regular Galaxy S20 is available in both 4G and 5G versions, whereas the Galaxy S20+ and Galaxy S20 Ultra come in only 5G-ready variants.

There are three key benefits to choosing a 5G-ready version of the Galaxy S20:

At the moment, you can get a £288 discount on the Galaxy S20+ at Vodafone. You’ll get a 5G-ready phone on Vodafone’s 5G Unlimited Max price plan, where you can download as much as you like with the fastest available speeds. You’ll also get Galaxy Buds+ earphones included in the deal, worth £159. You’ll get access to 5G coverage both in the UK and abroad, with 5G roaming and Global Roaming Plus (inclusive roaming in 81 destinations).

The Galaxy S20 phones are constructed with a solid aluminium frame, with both the front and the back of the device being covered in scratch-proof Gorilla Glass. All three phones are IP68-rated meaning they’re dust-proof and water-proof for up to 30 minutes at a depth of 1.5 metres.

Notably, Samsung has omitted a 3.5mm headphone socket on this year’s Galaxy S20 devices. You’ll get a pair of USB-C earphones included in the box, or you can use a pair of wireless Bluetooth earphones instead like Samsung’s Galaxy Buds. 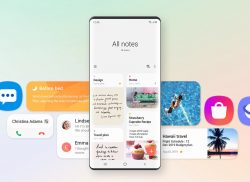 The Samsung Galaxy S20 devices come with the latest version of Google’s Android 10 operating system for mobile phones. This means you’ll have access to all of the latest features from Google including live caption, gesture-based navigation and improved privacy controls. You’ll also get access to all of the normal Google applications including Chrome, Docs, Gmail, Maps and the Google Play Store.

On top of the Android 10 operating system, Samsung offers their One UI 2 interface. This has additional functionality like streamlined notifications, digital wellness and the ability to customise your phone with custom themes.

The following table shows a side-by-side comparison of the technical specifications for the Galaxy S20, Galaxy S20+ and Galaxy S20 Ultra:

* The prices shown for comparison are a 24-month contract with unlimited data on Vodafone’s Unlimited Max price plan.

For more information about the Galaxy S20, please see Samsung’s official website. At the moment, Vodafone are offering a £288 discount on the Galaxy S20+ with a pair of free Galaxy Buds+ earphones worth £159.