If you’re looking for 4G mobile broadband on EE, you can now get the Huawei 4G WiFi 2 portable hotspot from £20/month. This new hotspot allows you to share a 4G mobile broadband connection with up to 16 other devices at the same time whilst you’re out and about.

Customers buying a Huawei 4G WiFi 2 portable hotspot will be able to access up to Category 6 LTE speeds on the EE network (up to 300Mbit/s download and up to 50Mbit/s upload). A range of data plans are available on EE with between 15GB and 50GB of data per month, on either an 24 month contract or 1 month rolling contract.

For most people, we’d probably recommend the 30GB data plan which is available for £20/month. This is a decent sized data allowance for regular portable hotspot usage and should cover the majority of users. For high users, it may also be worth having a look at the 50GB plan.

On EE, the monthly charge on your contract will increase by RPI inflation in March of each year. 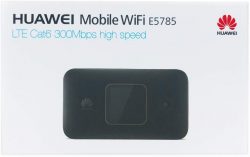 Customers signing up for EE’s 4G mobile broadband service will now receive the Huawei 4G WiFi 2 portable hotspot (Huawei E5785). Allowing you to access Category 6 LTE speeds on the EE network (up to 300Mbit/s download and up to 50Mbit/s upload), it will allow you to share a 4G mobile broadband connection with up to 16 other devices at the same time.

Being a battery-powered device, the Huawei 4G WiFi 2 can easily be used when you’re out and about. This differs from 4G home broadband routers like 4GEE Home which are mainly confined to fixed locations as they require an ongoing power connection from the mains. The hotspot has a built-in 3,000mAh battery which, according to Huawei, should give you up to 12 hours battery life in operation and up to 600 hours of battery life if the device is left in standby. When it runs out, you can use the micro-USB port and the provided micro-USB cable to recharge the device. 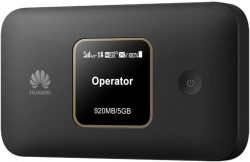 Another advantage compared to the portable hotspots on other mobile networks is the built-in LCD display on the front of the hotspot. This shows you information about your mobile network connection along with wi-fi connectivity and the remaining battery life of your device. It will also show you how much data you’ve used, making it easy to track your usage against the data allowance on your plan.

On EE, the Huawei 4G WiFi 2 hotspot is only available in black. However, it’s also possible to get a version of the device in white if you’re willing to buy it on an unlocked basis from Amazon.co.uk. 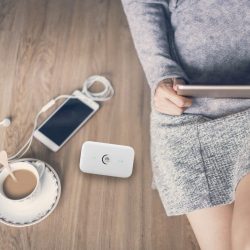 As an alternative to buying the Huawei 4G WiFi 2 from EE, you could also consider the 4GEE WiFi and 4GEE WiFi Mini portable hotspots from EE. These EE-branded devices are available on a similar range of price plans and have better specifications in a number of areas like network connectivity.

It’s also possible to consider the mobile broadband hotspots from other mobile networks like Three and Vodafone. You can get unlimited data from £22/month on Three’s mobile broadband service and from £28/month on Vodafone mobile broadband. This compares to £30/month for EE’s largest data plan of 50GB per month.

The following table compares the Huawei 4G WiFi 2 on EE to rival offerings on Three and Vodafone:

For more information, see our in-depth guide to mobile broadband in the UK.

If you’re mainly looking to use your 4G broadband connection in a location where a mains power supply is always available, consider getting 4G home broadband instead of 4G mobile broadband.

With a 4G home broadband router, you’ll get a device that is far more powerful than a normal portable wi-fi hotspot. You’ll normally get access to faster 4G download speeds, better wi-fi connectivity, the ability to plug in wired Ethernet devices and the ability to use an external antenna to improve the signal strength of your connection.

On EE, the 4GEE Home Router is available for a similar price as the Huawei 4G WiFi 2 hotspot. The 4GEE Home Router supports Category 7 LTE speeds (up to 300Mbit/s download and up to 100Mbit/s upload) along with dual-band wi-fi connectivity on up to 32 devices. The wi-fi network on 4GEE Home should have up to 30 metres of range, compared to the 10 metre range on the Huawei 4G WiFi 2 hotspot. This makes it easier to cover the whole of your home. You’ll also get 2 Gigabit Ethernet sockets and a pair of SMA connectors for attaching an external antenna to router. 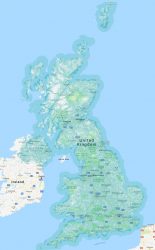 Customers signing up to EE’s mobile broadband service will get access to 99% population coverage on EE’s 4G network. This equates to more than 90% geographical coverage, with EE aiming to increase this to 95% by the end of 2020.

Before signing up for EE’s mobile broadband service, it’s worth double-checking to make sure there’s coverage in your area. You can do this by entering your postcode on EE’s online coverage map:

The Huawei 4G WiFi 2 hotspot supports EE’s 2G, 3G and 4G networks. If you’d also like access to 5G, this is available on the 5GEE WiFi with the HTC 5G Hub hotspot.

For more information, see our in-depth guide to the coverage on EE. You can also see our overview of how mobile coverage works in the UK.

If you’re travelling abroad to another country, you can continue using your Huawei 4G WiFi 2 hotspot through EE’s international roaming service.

For customers travelling to one of 48 European countries, it’s possible to use up to 50GB of your data allowance abroad at no extra cost each month. Beyond this 50GB limit, you’ll be surcharged at a rate of 0.36p/MB (£3.60 per GB).

For customers travelling outside of Europe, additional roaming rates apply for using your mobile broadband service.