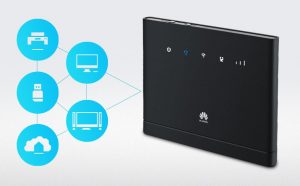 Over the past year, 4G home broadband has rapidly grown in popularity as an alternative to fixed-line broadband that’s delivered through a phone line or cable.

The easiest way to get 4G home broadband is as part of a package like Three’s Huawei B535 or AI Cube B900. You can also get Vodafone’s GigaCube package or EE’s 4GEE Home. As an alternative, some people prefer to build their own “do-it-yourself” package by buying an unlocked 4G broadband router and using it with an unlimited data SIM card.

In this article, we’ll review 4G home broadband routers that are available from Huawei on an unlocked basis. If you’re building your own 4G home broadband solution, you can choose from routers like the Huawei B310, B315, B525 and B618.

If you’re looking for an unlocked 4G home broadband router, Huawei currently offers a choice of four devices in the UK: the B310, B315, B525 and B618.

The following table shows a side-by-side comparison of the four routers:

Through the rest of this article, we’ll review each of the unlocked 4G broadband routers in more detail. 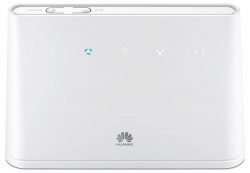 There’s a single Gigabit Ethernet socket for connecting wired devices to your network and a RJ11 port for attaching a telephone to use any minutes that are included on your plan.

Show full specifications for Huawei B310 ↓

Until September 2019, Three offered a very similar router called the Huawei B311 HomeFi.

As of September 2019, Three is now offering new 4G broadband customers a Huawei B535 HomeFi+ router instead of the old Huawei B311. For more information, read our full review of the HomeFi service. 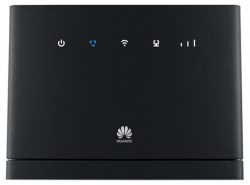 For most people, the Huawei B315 is a better choice if you’re looking to get an entry-level 4G broadband router on an unlocked basis.

Available for around £100 unlocked at Amazon.co.uk, the Huawei B315 is priced similarly to the B310. Like the B310, the Huawei B315 also supports Category 4 LTE speeds (up to 150Mbit/s download and up to 50Mbit/s download). You can connect up to 32 devices to the router using 2.4GHz Wi-Fi (802.11b/g/n technology). There’s also 2 SMA sockets for attaching an external antenna to your router.

Where the Huawei B315 wins out over the B310 is with the four Gigabit Ethernet sockets for connecting wired devices to your network. The router also has additional support for band 38 LTE coverage at 2600MHz. This is used by Vodafone and EE in certain areas to give additional capacity and faster download speeds. You’ll also get a choice of colour options with the Huawei B315: either black or white.

Show full specifications for Huawei B315 ↓ 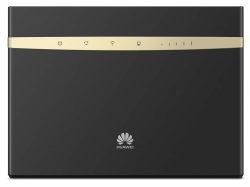 The Huawei B525 is a mid-range 4G home broadband router.

Available from around £122 at Amazon, it supports faster Category 6 LTE speeds (up to 300Mbit/s download and 50Mbit/s upload). You’ll also get dual-band Wi-Fi connectivity on up to 64 devices (including 802.11ac Wi-Fi using 5GHz spectrum). Both of these upgrades should give you a significant performance improvement over more basic routers like the Huawei B310 or B315.

Alongside the dual-band Wi-Fi connectivity, the Huawei B525 has four Gigabit Ethernet sockets for you to connect a wired device to your network. There are also 2 SMA sockets for attaching an external antenna and a RJ11 socket for attaching a phone to your router if you’d like to use the inclusive minutes on your plan.

The Huawei B525 is available in a choice of two colours: either black with a golden strip, or white with a silver strip.

Show full specifications for Huawei B525 ↓

At the time of writing, you can get a Huawei B525 for around £122 unlocked. This can be paired with an unlimited data SIM card costing you about £20/month.

As an alternative, it may also be worth considering the Huawei B535. This is available as part of a package from Three, starting from £20/month when you take a 24-month contract. Often, this will work out to be better value than buying the Huawei B525, especially when the cost of your unlimited data plan is taken into consideration.

Huawei’s flagship unlocked router for 4G home broadband is the Huawei B618, which is available for around £250 unlocked.

The key selling point of the Huawei B618 is its support for 4×4 MIMO technology. This means the router has four built-in antenna which can be used at the same time to access faster download speeds (the other routers listed on this page only support 2×2 MIMO). Because of this, the Huawei B618 can support up to Category 11 LTE speeds (up to 600Mbit/s download and 50Mbit/s upload).

One notable limitation is the support for 4×4 MIMO only works with the internal antenna. You can use the two TS-9 connectors for attaching an external antenna but this will drop you down to 2×2 MIMO.

Elsewhere, the Huawei B618 also supports dual-band Wi-Fi, with 802.11ac wi-fi available on up to 64 devices at one time. There are also two Gigabit Ethernet sockets for attaching a wired device to your network and one RJ11 phone socket for attaching a handset.

The Huawei B618 is only available in white and has a tall cuboid form factor. This differs from the more traditional rectangular form factor used by the Huawei B310, B315 and B525.

Show full specifications for Huawei B618 ↓ 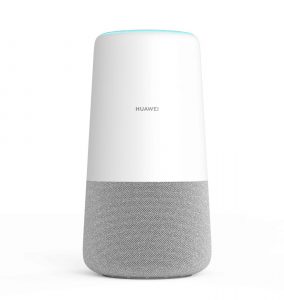 If you purchase an unlocked 4G home broadband router, you’ll need to get a SIM card for it before you can go online.

The following table shows a list of unlimited data SIM cards that are currently available in the UK:

Before choosing an unlimited data plan, it’s important to familiarise yourself with the terms and conditions on each network. For instance, both EE and O2 will only allow you to have 12 devices connected to your router. Separately, Vodafone has some download speed restrictions when you choose their Unlimited Lite or Unlimited plans.

Typically, we’d recommend choosing an unlimited data SIM card from Three. This is because you can get unlimited data from just £20/month with no limits on how many devices you can connect and with no download speed limits imposed by the network. You’ll also get 5G coverage at no extra cost when it arrives in your area.

Alternatively, you may also want to read our guide on 4G broadband in the UK and buying an external antenna for your router.

Your Comments 34 so far

We'd love to hear your thoughts and any questions you may have. So far, we've received 34 comments from readers. You can add your own comment here.