In the UK, Sky Cinema now includes Paramount+ at no extra cost. Worth £6.99 per month from Paramount+, it gives you access to a mountain of entertainment with iconic shows like Halo, 1883, Star Trek: Strange New Worlds and The First Lady. You’ll also get movies on the service, including Scream 5.

If you’re a Sky TV customer, you can add Sky Cinema for £12 per month on an 18-month contract, giving you access to an unrivalled range of blockbusters, and Paramount+ at no extra cost. Meanwhile, if you’re new to Sky, you can get Sky TV with Sky Cinema & Netflix for £35 per month.

In this article, we’ll look at the new Paramount+ service and what you’re able to watch on it. We’ll then look at the best Sky Cinema deals currently available, with Paramount+ included at no extra cost.

In the UK, Paramount+ is a new online streaming service with blockbuster movies, original shows and television series. It’s the home of exclusive content from Paramount Pictures and the Showtime television network, along with the Comedy Central, MTV and Nickelodeon channels.

It normally costs £6.99 per month to get a Paramount+ subscription. However, you can get it at no extra cost if you’re a Sky Cinema customer with Sky Q or Sky Glass.

At launch, you’ll be able to watch some of the following shows on Paramount+: 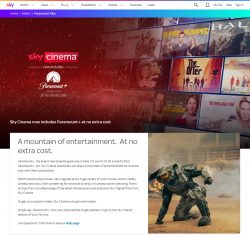 You’ll also find a massive selection of movies on Paramount+ including some of the biggest franchises and award-winning classics. Movies available at launch include Mission Impossible: Fallout and Transformers. There will also be new releases through 2022, including Scream 5 which is due to be added in July. Alongside that, there are films for the whole family including Paw Patrol: The Movie, Jerry & Marge Go Large and Grease.

The Paramount+ service also has a range of children’s television series including Kamp Koral, Rugrats, The Adventures of Paddington and Paw Patrol.

If you’re a Sky Cinema subscriber with Sky Glass or Sky Q, you’ll now get Paramount+ included at no extra cost (normally worth £6.99 per month from Paramount+). This is in addition to the unrivalled range of movies you’ll already get on Sky Cinema, including Sky Original films.

If you’re already a Sky TV customer, you can add Sky Cinema to your existing plan for just £12 per month.

Meanwhile, if you’re new to Sky, you can choose one of the following deals:

You can also build your own custom plan incorporating other services like Sky Broadband.

As a Sky Cinema customer, you’ll be able to watch Paramount+ through the dedicated app on your Sky Glass TV or Sky Q box. Alongside that, you’ll get access to the Paramount+ app and website. You can use this to stream from other devices like your smartphone, tablet or laptop.