If you’re looking to watch live football from the Premier League this summer, Sky Sports is your go-to location for the biggest games.

You can watch more than 400 live games on Sky Sports this season, across four top leagues. This includes 128 live Premier League games along with matches from the EFL, the Scottish Premiership, the FA Women’s Super League and more. In addition, Sky is also the home for Bundesliga football in the UK.

If you have a Sky Sports subscription, you’ll have access to the dedicated Sky Sports Premier League channel along with the Sky Sports Football channel. Together, they’re showing live football throughout the season with over 400 games, including 128 games from the Premier League. You’ll also get round-the-clock analysis and highlights with interviews, the latest news, documentaries and more.

On Sky, both channels are included in HD as standard. You’ll also get access to the Sky Sports mobile application. This gives you access to highlights and analysis, as well as allowing you to watch the Sky Sports channels wherever you are.

If you get the complete Sky Sports package on Sky TV, you’ll also get the following six channels included alongside Sky Sports Premier League and Sky Sports Football:

If you’re new to Sky, it’s currently possible to get Sky TV with Sky Sports for £42 per month. This includes the Sky TV Signature package with more than 300 channels and a Sky Q set-top box through which to watch it. You’ll get all 8 Sky Sports channels included in HD.

If you want access to the BT Sport channels in addition to the Sky Sports channels, you can get them both on Sky TV with Sky Sports & BT Sport for £67 per month:

If you’re an existing Sky TV customer, you can add the Complete Sky Sports package to your existing plan for £25/month. Alternatively, you can get just the Sky Sports Premier League and Sky Sports Football channels for £18/month as part of the current 2-for-1 offer. 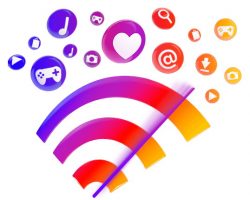 For even bigger savings, consider getting Sky’s Superfast Broadband together with Sky TV and Sky Sports in one combined package.

At present, you can get a combined package from £62 per month:

The following table shows upcoming matches that you can watch on the Sky Sports Premier League channel. Live coverage and pre-match analysis normally begins one hour prior to the kick-off.

Alongside the 128 live Premier League games, Sky also has live action from the EFL, Scottish Premiership, FA Women’s Super League and more. Sky is also the exclusive home for Bundesliga football in the UK, with the new season also due to kick off on the 13th August. You can see a full list of upcoming fixtures and when they’re showing on the Sky Sports website.

You can use the Sky Sports red button when watching selected games live on Sky Sports. This gives you access to additional functionality, such as the ability to: 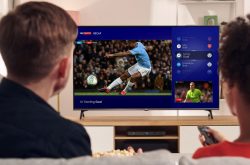 You’ll have access to Sky Sports Recap when watching the Sky Sports channels on Sky Q. This is an interactive app which allows you to catch up on highlights, whilst also keeping an eye on the live game.

Within the Sky Sports Recap app, you’ll see a timeline of key events in the game with information such as what happened (e.g. a goal or a missed shot), the player involved and the time in the match. You can choose an event to see a clip of the action from that time.

There’s more information about how Sky Sports Recap works on the Sky website.

As a Sky Sports customer on Sky TV, you’ll get inclusive access to the Sky Sports app. You can use this to watch the Sky Sports channels on your smartphone or tablet. Within the app, you can also follow the latest sports news, analysis, live blog posts and video highlights.

If you’re a Sky Mobile customer, you’ll be able to stream from the Sky Sports app without using your data. 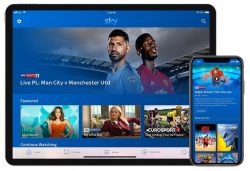 As part of your Sky TV subscription, you’ll also get inclusive access to the Sky Go app. This allows you to watch the Sky TV channels included with your subscription wherever you are. You can use the Sky Go app on your laptop, tablet or mobile phone. It gives you access to live TV channels, along with on-demand content and catch-up TV.

If you’re a Sky Mobile customer, you’ll also be able to stream from the Sky Go service without using your data allowance. You can get a Sky Mobile SIM card from £6 per month:

It’s also possible to get a range of devices on Sky like the iPhone 12 and iPad.