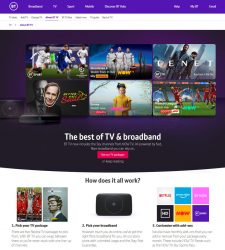 In the UK, BT now offers a flexible television service called BT TV. Available with BT Broadband, it gives you access to Netflix and the Sky TV channels through NOW. You’ll get a clever BT TV box with the ability to pause and rewind live television, as well as recording up to 300 hours of TV. The BT TV box also gives you access to Freeview channels, BT Sport, BBC iPlayer, AMC, Prime Video and more (all dependent on your plan).

At the moment, you can get a BT TV package from £16/month if you’re a BT Broadband customer. Alternatively, you can get BT’s fibre broadband service with BT TV from £45.99/month.

In this article, we’ll review the BT TV service. We’ll start by looking at how it works and at the flexible television packages that are available on BT TV. We’ll then look at the BT TV box in more detail before finding out how you can switch your television provider to BT.

How Does BT TV Work? 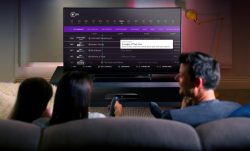 In the UK, BT’s television service, BT TV, allows you to watch, pause, rewind and record live television. You can also watch on-demand TV shows and movies from a number of providers including Netflix and NOW.

Customers subscribing to BT TV can currently choose from five flexible TV packages. These give you access to channels including those from Sky, Freeview and BT. Depending on the plan you choose, channels available might include Sky Atlantic, Sky Showcase, Sky Witness, Sky Sports, Sky Cinema, BT Sport, AMC, Nickelodeon and more. You can also change your channels every month (e.g. removing sport when the football season ends or adding a kids bolt-on when the school holidays begin).

You’ll be given a BT TV box when you sign up to the service. This plugs in to the back of your television, allowing you to access everything you’ve paid for. It connects to both your aerial and your fibre broadband connection (there’s no need to have a satellite dish or another cable connection). You’ll also get the BT TV app, allowing you to watch television on-the-go and to schedule recordings on your box. 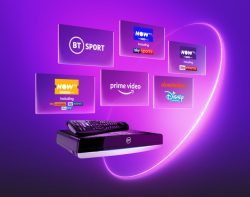 Before you’re able to get BT TV, you’ll need to choose a BT fibre broadband plan. This is because BT TV isn’t available as a stand-alone service. Instead, it uses your BT Broadband connection to deliver a lot of the content into your home (as opposed to using a satellite dish or a cable connection like some other TV providers).

If you don’t currently have BT Broadband, you can choose from the following BT Broadband plans from £27.99 per month:

All of BT’s fibre broadband plans will work with BT TV. Watching HD-quality content will only use around 5Mbps of your broadband connection.

However, customers wanting to watch BT TV in 4K ultra-HD quality are recommended to choose the Fibre 2 plan (or a BT full fibre plan if that’s available in your area). This is because a 4K ultra-HD stream will normally use around 25-30Mbps of your connection. For a smooth experience watching BT Sport Ultimate, BT recommends a minimum connection speed of 44Mbps for your BT broadband connection. 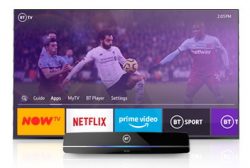 Once you’ve chosen a BT Broadband plan, you can choose from the following BT TV packages:

Although there’s a 24-month contract for your BT TV service, you can change between the five packages whenever you like. You can also add a range of add-ons like access to children’s TV channels.

The BT TV Entertainment package costs £17/month, including access to Netflix and a NOW Entertainment Membership. This gives you access to channels including Sky Atlantic, Discovery and Comedy Central. You’ll also get access to AMC, more than 300 on-demand box sets and over 70 channels from Freeview.

The following channels are included within the BT TV Entertainment package:

You’ll also get inclusive access to the BT TV and NOW apps, allowing you to watch and catch up on TV whilst you’re on-the-go.

If you’re not currently a BT Broadband customer, you can get the following BT Broadband plans with the BT TV Entertainment package from £46.99 per month:

For customers wanting a larger selection of TV shows and movies, it’s possible to get the Big Entertainment package for £27/month.

Big Entertainment gives you everything that’s on the Entertainment package, plus a NOW Cinema membership. This gives you 11 Sky Cinema channels, plus more than a thousand movies to watch on-demand at any time.

Customers choosing Big Entertainment will have access to all of the following channels:

You can get BT Broadband with BT TV and the Big Entertainment package from £56.99 per month:

You’ll also get access to the BT Sport app included with your package. This allows you to watch live and on-demand sporting content on-the-go. There’s also lots of additional content available through the app including highlights, interviews, news and more.

At present, it’s possible to get BT Broadband with the BT TV Sports package from £45.99 per month:

If you want access to all of the sporting action across both Sky Sports and BT Sport, you can choose the Big Sport package for £41/month on BT TV.

The Big Sport package includes all of the following channels:

With Big Sport, you’ll get access to both the BT Sport and Now TV apps on your phone, allowing you to watch live and on-demand sporting content wherever you are.

You can get a BT fibre broadband plan with the BT TV Big Sports package from £70.99 per month:

For the ultimate TV experience, you can choose BT’s flagship VIP TV package. This gives you everything that’s on the Big Sport and Big Entertainment packages, plus full HD channels from BT and NOW TV. You’ll also get a Netflix Standard subscription included along with BT Sport Ultimate, the dedicated 4K ultra-HD channel from BT.

The following channels are included within the VIP package:

You’ll get access to the BT TV, NOW TV and BT Sport apps included in your subscription, allowing you to watch live and on-demand content from a smartphone or tablet. 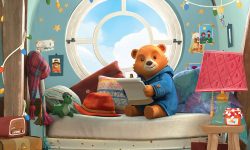 To further customise your BT TV package, you can add a range of bolt-ons to your BT TV plan. All of these bolt-ons come on a one-month rolling contract, so you can add them or remove them from your plan at any time. 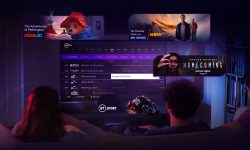 As part of your BT TV service, you’ll be given a BT TV Box which plugs in to the back of your television. The box uses technology from YouView which is a joint venture between some of the UK’s largest broadcasters and broadband internet providers.

One of the clever things about YouView technology is how it combines internet-based television with regular Freeview and DVR recording technology.

The BT TV box integrates with BBC iPlayer, ITV Player, All 4, NOW TV and many other online streaming services. Everything is combined into a single easy-to-use menu and electronic programme guide (EPG). For instance, you can simply go to channel 340 to watch Sky One on NOW TV or you can go to channel 333 to watch Netflix on-demand. There’s no need to load up different apps and interfaces for each channel you want to watch.

In addition to the integrated programme guide, there’s a search feature that works across all of the channels and services. A 14-day programme guide is also provided (going back 7 days and going 7 days into the future). For instance, you’ll be able to watch lots of programmes that have screened over the past week even if you haven’t recorded them. This is because the BT TV box can simply fetch it from the relevant on-demand service when required.

One thing to note about the BT TV box is that it doesn’t work on a wireless connection. You’ll need to use a wired Ethernet connection to your router. If your BT Smart Hub and BT TV box are located in the same room, you can use the 10-metre Ethernet cable provided by BT. Alternatively, if the BT TV box is a long way from your BT Broadband Smart Hub, you can use one of their BT Mini Connectors which use powerline technology.

If you sign up for a BT fibre broadband plan with BT TV, you’ll now receive the BT TV Ultra HD box as standard (this is also known as the BT TV YouView+ G5 box).

Customers with a copper (ADSL) broadband connection will be provided with the BT TV YouView+ G4 box instead. This is similar to the newer G5 but doesn’t have support for 4K ultra-HD content.

Meanwhile, if you order an additional box for another room of your home, you’ll get the BT TV YouView Z4 box. This is a slightly smaller box that doesn’t have recording capabilities, but you’ll still be able to pause and rewind live television, as well as accessing catch-up TV.

The following table shows a side-by-side comparison of the three BT TV boxes: 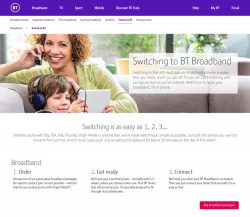 Start by ordering your new broadband and TV service from the BT website. During the online order process, BT will give you a switchover date for your service. This will typically be in around two weeks time, unless you ask them for a later switchover date. You’ll then need to contact your old broadband and TV provider to cancel your old service (ideally for the same date that your BT service begins).

For step-by-step instructions on how to switch to BT Broadband, please select your current broadband provider from the list below: