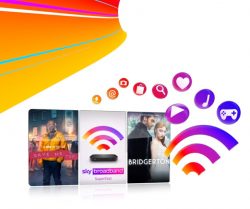 If you’re looking for a low-cost TV and broadband deal, you can get Sky Essentials for just £31 per month (this is also known as Sky TV Essentials or Sky Q Lite).

The £31 per month fee includes a Sky Q box and Sky Superfast 35 Broadband.

Sky TV Essentials comes with access to more than 200 channels on a Sky Q box, with the ability to pause, rewind and record live TV. You’ll also be able to watch catch-up TV on BBC iPlayer and other apps through your Sky Q box.

In this article, we’ll review the Sky Essentials deal with Sky Q Lite and Superfast Broadband. We’ll look at how the TV Essentials plan works, the channels you’ll get included with it, and how you can switch your broadband & TV provider to Sky.

What is Sky TV Essentials? 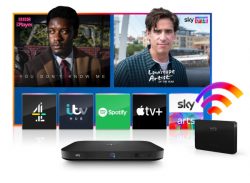 In the UK, Sky now offers a lower-cost TV Essentials deal. Available exclusively to new Sky TV customers, it comes with a Sky Q box and access to more than 200 free-to-view channels. You’ll get all of the normal functionality available on Sky Q such as apps and the ability to pause, rewind and record live television. You’ll also get a clever remote with voice control functionality built-in.

Alongside your Sky Q box, you’ll also get Sky’s Superfast Broadband included. This gives you an average download speed of either 36Mbps or 59Mbps, depending on the plan you choose. You’ll also get a speed guarantee included as standard on your broadband.

You’ll normally pay £28 per month for Sky Superfast broadband on its own, without any TV included.

Unlike Sky’s other TV and broadband deals, you won’t get access to premium TV channels on the Sky Essentials deal.

For access to premium TV channels like Sky Atlantic, Sky Max, Sky Sports and Sky Cinema, you can choose one of the following TV and broadband deals from £39 per month:

In particular, we recommend the £43 Sky TV with Netflix and Superfast 35 Broadband deal. This comes with Netflix included (worth £6.99 per month). You’ll also get Sky’s entertainment channels, along with on-demand content through the Sky Box Sets service.

With Sky TV Essentials, you’ll have access to more than 200 free-to-view channels through a satellite dish. This includes all of the BBC, ITV, Channel 4 and Five channels. You’ll also get Sky Arts and other entertainment channels like CBS Drama, Food Network, Dave, Quest, Pick and more.

All of the following channels are available on Sky TV Essentials:

On Sky TV Essentials, you won’t get Sky’s premium TV channels like Sky Atlantic, Sky Max, Sky Cinema and Sky Sports. It also won’t be possible to stream from the Sky Box Sets service. You can, however, still use catch-up TV apps on your Sky Q box (including BBC iPlayer, All4, Spotify, YouTube and more).

You can also use the Netflix application to watch shows and movies on your Sky Q box (a separate subscription to Netflix is required for this). If you do this, however, you might be better off getting a Sky TV & broadband deal that comes with Netflix included. At present, you can get a plan from £43 per month with Sky’s entertainment channels, Netflix and Superfast Broadband included.

The channels available on Sky TV Essentials are similar to what was previously offered on the Freesat from Sky service which is now discontinued. 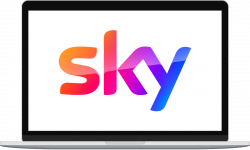 If you’re currently using another broadband or TV provider, it’s easy switching your service to Sky.

Start by ordering your Sky Essentials plan online. When you place your order, you’ll be able to schedule the installation date for your service.

In most cases, Sky will contact your old broadband provider to automatically cancel the old service for you. However, this won’t be the case if you’re a Virgin Media customer – if so, you’ll need to contact them separately to cancel.

For step-by-step instructions on how to change your broadband & TV provider to Sky, please select your current provider from the list below:

Switch to Sky Broadband Your step-by-step guide to switching

You can also read our full guide on switching broadband providers in the UK.

Your Comments 22 so far

We'd love to hear your thoughts and any questions you may have. So far, we've received 22 comments from readers. You can add your own comment here.