Fonehouse have launched their Black Friday 2020 phone deals, with a competition to have your mobile phone bill paid for the next 20 years.

We’re eighteen days away from Black Friday 2020 which falls this year on the 27th November. With the lockdown still in place over the Black Friday weekend, it’s likely to mainly be an online affair. Over the next two weeks, we’re expecting discounts and offers from many of the online retailers.

Although Black Friday is still a little while away, some online retailers have already started launching their first Black Friday offers.

This year, Fonehouse, one of the UK’s independent mobile retailers, has become one of the first to launch their Black Friday deals. They’re offering discounts on a range of handsets including the iPhone and Samsung Galaxy phones in the Black Friday phone deals section of their website. You can get the mobile phones on contract from a range of networks including EE, Three and Talkmobile. 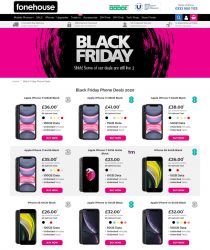 In addition to the Black Friday discounts, they also have an eye-catching competition where you can get your mobile phone bill paid for the next 20 years. This means you wouldn’t need to pay another mobile phone bill until the end of 2040 (when we’ll probably all be walking around with mobile phones that have a holographic display).

To enter the competition to have your phone bill paid for the next 20 years, you’ll need to buy a mobile phone from Fonehouse on contract between the 10th November and 30th November. You’ll be entered automatically into their Black Friday competition when you do this. You can also benefit from the Fonehouse price promise which means they’ll refund the difference if you find a cheaper deal elsewhere.

You can follow the daily deals from Fonehouse by following their #TGIBF hashtag on social media.