Samsung has released the Aura Red version of the Galaxy S20+ exclusively on Vodafone. It’s available with £288 off and with a free pair of Galaxy Buds+ wireless earphones.

For the first time, Samsung has released the gorgeous Aura Red version of their Galaxy S20+ smartphone in the UK.

Available exclusively on Vodafone, the Samsung Galaxy S20+ Aura Red version offers an eye-catching design that’s bound to stand out. It also has cutting-edge specifications like a 64 megapixel camera, a 6.7-inch Quad HD+ screen and high-speed 5G connectivity on the Vodafone network.

Until the 30th July, the Galaxy S20+ Aura Red is available with a £288 discount on Vodafone’s unlimited data plans. You’ll also get a free pair of Galaxy Buds+ earphones (worth £159), allowing you to listen to music and to make phone calls without wires.

Samsung’s Galaxy S20+ is a powerful 5G-ready smartphone. With a cutting-edge 64 megapixel camera and a super-sharp Quad HD+ screen using Samsung’s AMOLED technology, it’s one of the top choices at the moment if you’re looking for a high-end 5G smartphone.

Some of the key features at a glance:

Until now, the Galaxy S20+ has been available in Cosmic Grey and Cosmic Black. However, it’s now also available in Aura Red as an exclusive to the Vodafone network in the UK. 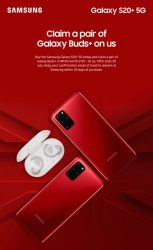 As a special launch offer, Vodafone is currently offering £288 off the Galaxy S20+ on their unlimited data plans. This makes it even cheaper than the regular Galaxy S20. This discount is available until the 30th July.

Until the 30th July, you’ll also get a free pair of Galaxy Buds+ wireless earphones. These earbuds are worth £159: they come with a 2-way dynamic speaker and an impressive 11 hours battery life, allowing you to listen to music and to make phone calls from the buds.

We’d currently recommend getting the Galaxy S20+ on Vodafone’s Unlimited Max plan. This gives you access to 5G coverage with the fastest available download speeds on Vodafone’s network. You’ll also get access to VeryMe Rewards and Vodafone’s Global Roaming Plus with inclusive roaming in 81 worldwide destinations (including the USA, Canada, Australia, New Zealand, Mexico, South Africa, Turkey and more).

The Galaxy S20+ is available in Aura Red with 128GB of built-in storage. Until the 30th July, you can get it at a discounted price on the following price plans from Vodafone. You’ll also get a free pair of Galaxy Buds+ included:

On Vodafone Red, you can choose between 6GB and 24GB of data per month. All Vodafone Red plans include 5G with the maximum available speeds and inclusive roaming in 51 destinations. You can also add an Entertainment package for an extra £7/month.

For more information about the Aura Red version of Galaxy S20+, please see the Vodafone website. You may also find it of interest to read our reviews of the Galaxy S20 series and the Galaxy Buds+ earphones.